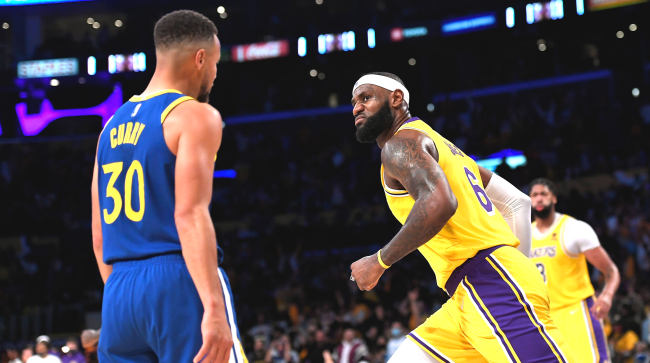 Ever since the 2012–13 season, Steph Curry’s first averaging more than 20 points per game and the Golden State Warriors’ first winning record since 2008, he has found himself consistently running into LeBron James.

Between Curry’s Warriors and James’ Heat, Cavaliers and Lakers teams, they have been in the NBA Finals 12 times combined with six titles between them.

Curry, however, is 3-1 head-to-head versus James in NBA Finals with the Warriors meeting the Cavaliers at the end of the season four years in a row from 2015 to 2018.

That’s not when their history began though.

According to a new interview with GQ magazine, Curry and LeBron actually first encountered one another while Steph was in his second year at Davidson.

Then, while dominating the 2008 NCAA Tournament, leading Davidson to upset wins over Gonzaga, Georgetown, and Wisconsin, James took a trip to Detroit to watch the young Curry in action.

“I was a sophomore in college and LeBron was coming to my games!” Curry said. “I actually still have the jersey he gave me. He signed a jersey for me. I think that was November of my junior year. On my wall at my parents’ house in Charlotte, it’s still there. And he wrote it to me, called me the king of basketball in North Carolina. So I guess it’s like the corny idols-become-rivals thing.”

I was watching Steph Curry’s Facebook movie, and there were some really cool moments in it.

Until your idols become your rivals, for real. pic.twitter.com/1ZnxvoXhT0

What do you suppose that jersey is worth?

Back in October, Curry, now in his 13th NBA season, was still amazed by LeBron.

“Let’s keep it real — what is he, in his 18th year? Nine straight Finals, all the things that he’s accomplished,” Curry said after a shootaround.

“You have a vision of sustaining your prime for as long as you can, kind of reimagining what that looks like. So you know the work that goes into it, the intentionality, especially in the offseasons, especially how you take care of your body, your mind. Balance on court, off court.

“For me, it’s a weird perspective just because I still remember my college days and he was just coming into his prime in the league.”

So there’s one more thing Curry and James have in common: both LeBron’s as well as Steph’s primes have lasted longer than most NBA players’ entire careers.