Steph Curry Taunts Ref Mark Kogut, Gets In His Face And Then Mocks Him By Calling Him The ‘MVP’ Of The Game 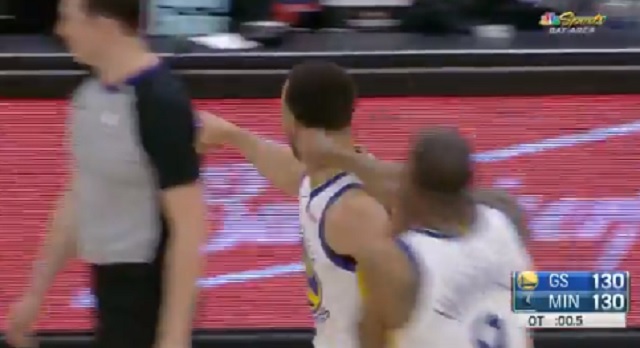 There was a bit of a wild ending to last night’s Warriors-Timberwolves game.

Nine Steph Curry points in the last 93 seconds of overtime, capped by this one, his 11th 3 punctuated with a ref taunt pic.twitter.com/HaWbgY6LnB

After the timeout following his 3-pointer Curry got in Kogut’s face before having to be separated by Boogie Cousins.

Boogie pulling Curry all the way away from the referee 😂 pic.twitter.com/a5UjiBqatN

On the very next play Durant was then called for a foul with .5 seconds left on the clock which allowed the Timberwolves to hit a game-winning free throw.

Kevin Durant gets called for foul with .5 seconds left in the game. costs the Warriors the game vs Wolves pic.twitter.com/Qo4MXX45mV

After the game, an unhappy Curry mocked Kogut and called him the “MVP of the game”.

Steph Curry: “You’d have to ask the MVP of the night, (referee) Mark Kogut.” pic.twitter.com/x3jlOaNflz

Durant was restrained while speaking to the media but would later take a shot at the refs on Instagram.

"I want to keep my money cause they gave me two bullsh*t techs… let me just stop talking about the officiating." pic.twitter.com/ZsRa113K72

“I don’t want to blame it just on that, but I mean, like I said, we deserved to play at least five more minutes of basketball,” “I’m not going to say we would have won the game — they had momentum going into the second overtime. I’m sure you guys would agree with me when I say we should be playing five more minutes.” If you look at the play … [Bates-Diop] lost me for a quick second, and when I caught the ball, I knew they were going to foul, and I got it up quick and he had two hands on me as I was going into my shot and the [Kogut], he was the best player on the floor,”. “He’s so good with his whistle, he knew they were going to foul me before I shot the ball. So he’s one of the greatest refs of all time.”

Here is Kevin Durant's reaction to that foul call on Instagram after the game… pic.twitter.com/HMhFXODJN7

Durant clearly fouled Karl-Anthony Towns on the final play and Steph Curry was out of line taunting the ref after the game-tying shot. The Warriors just come out like complete assholes here.