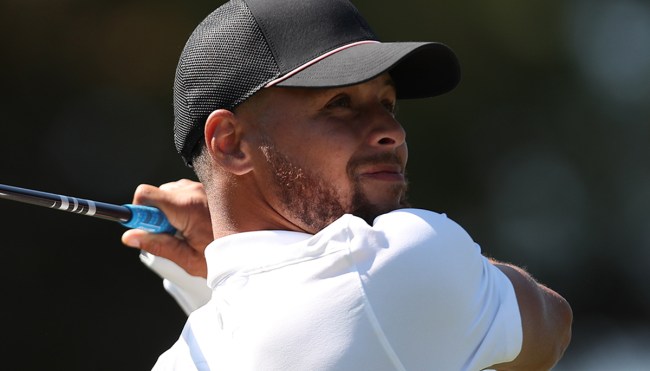 Each summer, some of the biggest names in sports and the entertainment industry descend upon Edgewood Tahoe Golf Course in Nevada for the American Century Classic, a three-day, 54-hole tournament that’s been held on an annual basis for over 30 years.

Fans who make the trek to Lake Tahoe head into the event knowing they’re not going to witness the quality of play that’s typically on display during The Masters or The British Open. With that said, you’re also never going to have the chance to watch Miles Teller, Charles Barkley, and Larry the Cable Guy all roaming the links of Augusta or St. Andrews on the same day.

The tourney is also overflowing with pro athletes who can more than hold their own on the golf course, and while some of them take things fairly seriously once the tournament kicks off, they’re usually more than down to interact with spectators during the two practice rounds that precede the start of the action.

That includes Patrick Mahomes, who autographed a tattoo of himself that was inked on the arms of a diehard Chiefs fan who proceeded to get the QB’s signature permanently embedded into his skin following the interaction this week.

Signed this yesterday for this guy… dude has the signature tattoo on top of the other today.. #ChiefsKingdom https://t.co/UUtLxzjwzM

Steph Curry also handed out an autograph to a guy who approached him on the course—but he made him work a bit harder for it.

On Thursday, the Golden State guard posted a video of what went down after he told the Warriors fan he’d sign his jersey if he dropped down on the tee box and banged out 30 push-ups before fulfilling his end of the bargain (another reporter captured the physical trial from a different angle).

Young fella asked how many push ups for the ✒️😂 #30 @ACChampionship pic.twitter.com/nQfh0kkvDw

⁦@StephenCurry30⁩ didn’t have time to sign autographs between 10th and 11th hole. Mason Barber, a 20-year-old #Warriors fan from SF, found a creative way to stand out in the crowd: He did 30 push-ups on the tee box in Tahoe. And he got the autograph (and handshake) pic.twitter.com/RBJei4RVSF