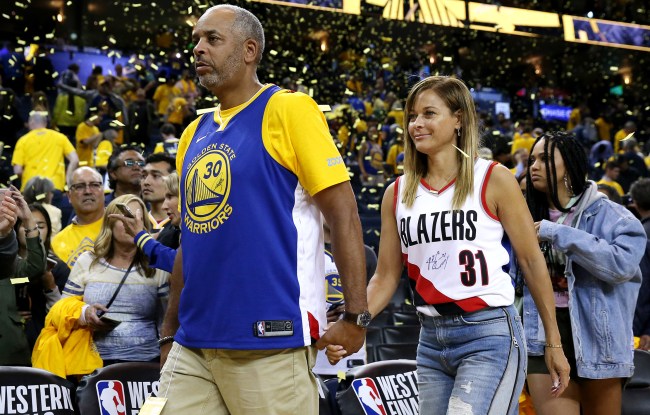 Tuesday night, for the first time in NBA history, two brothers, Seth and Steph Curry, faced off against each other in a conference finals. Happy Belated Mother’s Day, Sonya Curry!

So, in an effort to be impartial, Seth and Steph’s mom and dad, Dell, decided to just flip a coin to determine which parent would be rooting for which kid each game.

For Game 1 of the Western Conference Finals, Dell won the right to cheer for Steph and his Golden State Warriors, while Sonya got to cheer for Seth and the Portland Trail Blazers.

After Steph and the Warriors grabbed an early series lead with a 116-94 victory (sans Kevin Durant), Steph was asked by Julianne Herrera of San Francisco’s ABC 7 to discuss what it was like to be on court with his brother during such a high-stakes game.

Omg I was the one who asked him this! So fun to see the response blow up! Thanks @StephenCurry30 for the fun and sincere answer. As a young journalist this means so much. https://t.co/gz0RGTyfSr

“Yeah, we been talking about it for the last couple days, about how special it is. Obviously, we’ve played plenty of games now on the same court and you understand what that vibe is like, but on this stage, trying to chase a finals appearance, it’s pretty surreal,” replied Steph.

“I think I caught myself a couple of times looking up at the stands at my parents who did the whole coin flip thing… and they can’t help themselves so anytime either one of us did something good they both were clapping, so they gotta fix themselves,” Curry continued. “I told my mom, ‘Who you with?’ When I made a shot I saw her stand up and cheer but I saw all Portland gear and it was just weird. It’s probably more nerve-wracking for them.”