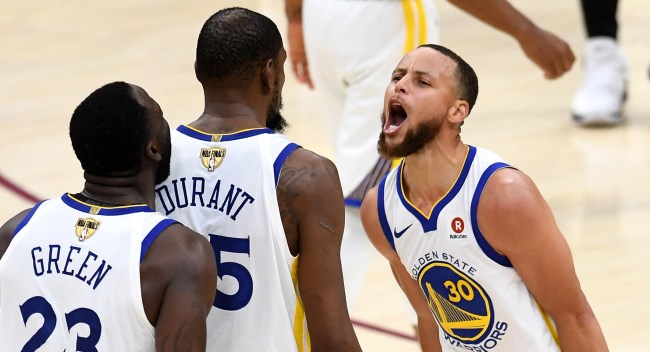 For some bizarre reason, Kevin Durant can’t seem to stop whining about his time playing for the Warriors. You know, those three seasons where he won two NBA championships and two NBA Finals MVP Awards AND made over $81 MILLION while doing it? Those years.

Durant said, among other things, that those years “didn’t feel as great as it could have been.”

This week, the face of the Warriors, Steph Curry, finally responded to Durant’s complaints.

Curry did his best to play nice, saying things like, “nobody is gonna take away the accomplishments we had.”

The best part of Curry’s interview with Rachel Nichols, which you can watch at 3 p.m. ET on ESPN, had to be when Steph responded to Durant’s comment that “the motion offense we run in Golden State, it only works to a certain point.”

Steph Curry gave me an exclusive tour of the Warriors new Biofreeze practice facility & it’s AMAZING – a court with a facial recognition tracking system that measures every shot, an underwater treadmill, sleep pods, a mini-barber shop, plus crazy-tall showers that fit 7-footers. pic.twitter.com/FtKurNoBB5

“Well, I don’t care what plays we ran,” Curry told Nichols. “We won two championships. And at the end of the day, we had a lotta talent and there was an expectation of us figuring out how to balance all that. And we talked a lot about it throughout the three-year run. It wasn’t always perfect, but I think in terms of, you know, the results and what we were able to do on the floor, that kinda speaks for itself. We all wanna play iso-ball at the end of the day in some way, shape or form. But I’d rather have some championships, too.”

Nothing but the bottom of the net.