Stephen A. Smith Stopped His Own Rant To Talk About How Hot The Wife Of Knicks Head Coach David Fizdale Is 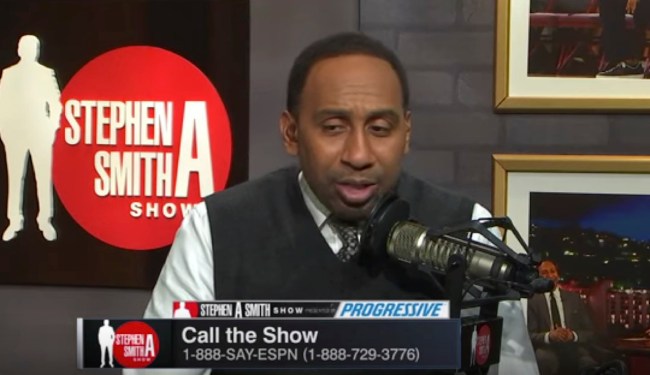 Stephen A. Smith is as opinionated as they come in sports media, often ranting about whatever pops into his mind and, as much as possible, being unfiltered. While the ESPN personality has talked about a number of different topics over the years, one topic of conversation came up today that was sure to catch his listeners a little off-guard.

While hosting his radio show, The Stephen A. Smith Show, the guy was on one of his classic passionate rants about the New York Knicks when, out of nowhere, he stopped himself to talk about how attractive the wife of the team’s head coach, David Fizdale, is. At first, Stephen A. makes it sound like it’s just a little mention, but he goes into full-on crush mode, talking about Fiz’s wife, Natasha Sen-Fizdale, for about a minute, even proclaiming her as “the first lady of New York City.” Take a look at the video below.

Stephen A. Smith really stopped his segment, just so he could talk about how fine David Fizdale's wife is…pic.twitter.com/dqzEkK8rua

Well, this is one topic that most people didn’t envision Stephen A. Smith covering today, but you never know what to expect from this dude, right? And, because I know you’re interested, here are a few pics of the lovely Mrs. Fizdale to see what Stephen A. was talking about, which were pulled from her Instagram account.

Not sure what’s been going on with Stephen A. Smith lately, but the dude has been on one for the past few months now, doing un-Stephen-A.-like things. Remember when he pulled that Hunter Hillenmeyer thing? Or how about leaving out Drew Brees on his rankings of playoff QBs in the NFL? Or his opinion that NFL Draft prospect Dwayne Haskins is more of a runner than a thrower compared to Kyler Murray? Yeah, it might be time for Stephen A. Smith to take a break from talking right now, because there’s no telling what type of stuff he’s going to talk about.