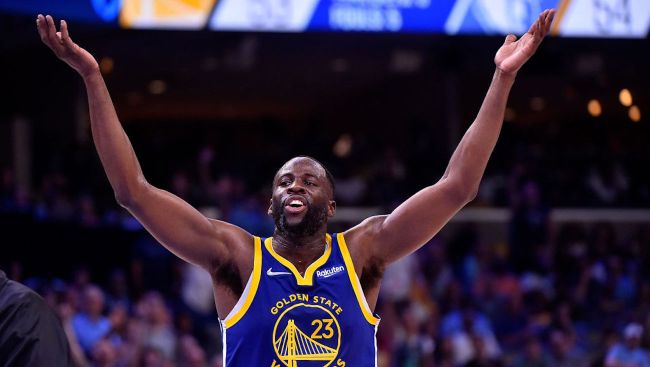 After reviewing the play, the officials gave the 32-year-old Michigan State University product a Flagrant Two foul, which resulted in him being ejected from the game.

Despite Green getting tossed, the Warriors were able to hold on without their defensive anchor and secure a thrilling 117-116 Game 1 victory over the up-and-coming Grizzlies.

During and after the game, though, the NBA world largely reacted with disgust when it came to Draymond Green’s ejection, particularly ESPN superstar Stephen A. Smith, who ripped the decision during the game’s halftime show.

“It’s a damn shame that this happened. You want to give him a technical foul? Fine. He clearly tried to hold the person [Clarke] up. Okay, you’re making a defensive play — it happens. To have the guy ejected and to compromise the potential outcome, and to leave us in a position where we’re talking about this ejection, as opposed to talking about two high-end competitors going after it, I think this tarnishes the level of competition that was out there today. There’s no excuse for this decision as far as I’m concerned. It was just utterly egregious.”

Stephen A and Jalen Rose lost their minds at halftime over the Draymond Green Flagrant 2 ejection pic.twitter.com/hiyoWOOaE7

With the win, the veteran Warriors took a 1-0 series lead over the upstart Grizzlies, who will look to even up the series when Game 2 tips off in Memphis on Tuesday night at 9:30 p.m.

RELATED: Stephen A. Smith Says Nets PG Kyrie Irving Is One Of The Most Delusional Athletes In American History