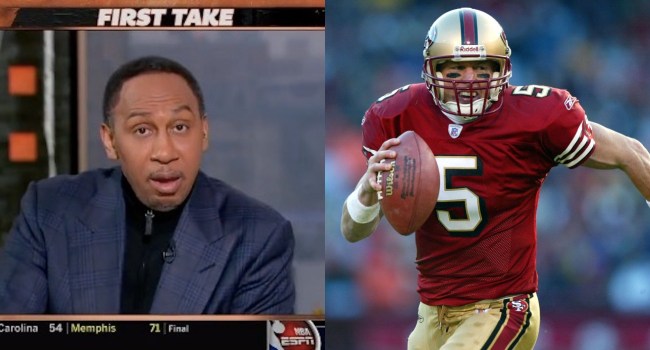 Garcia — who played for the San Francisco 49ers, Cleveland Browns, Detroit Lions, Philadelphia Eagles, Tampa Bay Buccaneers, and Oakland Raiders during his career — left a comment on Instagram implying that Kimes shouldn’t have a platform to speak about the game because she’s never thrown a touchdown pass.

Garcia was responding to Kimes’ analysis of current Niners quarterback Jimmy Garoppolo, who she said is “the definition of being part of the group project that gets an A, while doing none of the work.”

Naturally, these comments weren’t well-received by the sports media world, as ESPN has addressed Garcia’s comments on multiple programs, including the Friday episode of First Take, which saw Stephen A. Smith — the network’s biggest star — blast the 51-year-old former signal caller for his “sexist” remarks.

“Jeff Garcia… what he said about Mina Kimes was just ridiculous, and quite frankly, sexist,” Smith said before repeating Garcia’s comment live on-air. “I’ve never played football. There’s plenty of men that are on television that are talking about sports that have never played football. This list goes on and on, but you’re going to point the finger at her — who I believe does a sensational job, and I’m very proud to have her as a part of First Take… We have women doing outstanding jobs in this business and  they deserve their credit and they deserve their respect.”

“But as it pertains to Garcia, let me be clear: who the hell are you? Let me put this in its proper perspective. You are a former quarterback in the National Football League and nobody gives a damn what you have to say, other than the fact that you’re attacking somebody who didn’t deserve to be attacked. Mina Kimes pointed out how the San Francisco 49ers have not been winning because of Jimmy Garoppolo. Who’s the one person that’s been saying that for years? No one has said it more than me. Pornstar Jimmy is what I call him! You haven’t won because of him — you won because of Kittle, Deebo Samuel, Kyle Shanahan and his playcalling, and you damn sure won because of that defense… she wasn’t off-kilter. And the fact that you would choose to call her out like that is just incredibly disrespectful. It’s sexist.”

Smith then finished the rant with one of his classic Stephen A. closing shots:

“I’ll give you credit for this though, Jeff Garcia: this is the one thing you’ve said that has garnered anything newsworthy because nobody gives a damn about what you have to say because you weren’t that great any damn way,” Smith concluded.

"Who the hell are you? … Nobody gives a damn about what you have to say because you weren't that great any damn way." pic.twitter.com/OEXw1Nn2w8