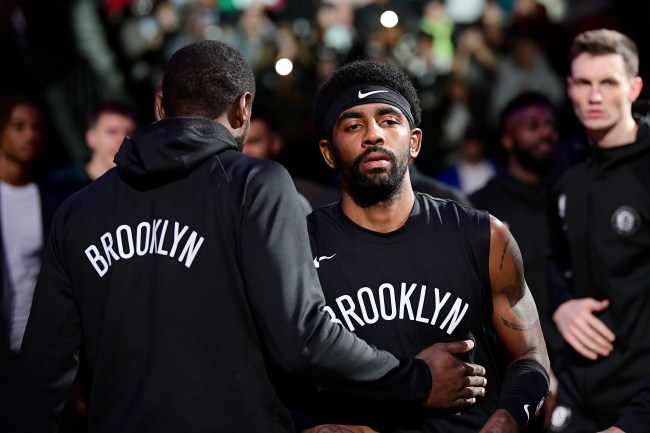 This is my second Kyrie article of the day. I thought one would be enough to express my frustration in him putting his teammates down after Wednesday’s loss to the Sixers. It was not.

To reiterate: Kyrie had 21 points in 20 minutes on 10-11 shooting in the loss in his third game back from injury. Very productive, very efficient. Woopdie doo.

Keep in mind, arguably the best player in the world is recovering and bound to change the entire complexion of the team next season. If any year is the Brooklyn Nets’ year, this isn’t it.

The only thing Kyrie needs to do this season is make the bed and fluff the pillows for Kevin Durant. But the dude just can’t get out of his own way.

“Collectively, I feel like we have great pieces, but it’s pretty glaring we need one more piece or two more pieces that will complement myself, [Kevin Durant], DJ, GT, Spence [Dinwiddie], Caris [LeVert], and we’ll see how that evolves.”

Excuse me, dude? You need one or TWO more pieces to add to Kevin Durant and Kyrie Irving. The Big Four, huh?

Deal with him Stevie…

.@stephenasmith is MAD at Kyrie for his recent comments.

We can tell because his voice reached a pitch not previously heard by human ears 😂😡 pic.twitter.com/wDo2SUIUc7

“I’m incredibly disappointed in Kyrie Irving right now….. How the hell are you going to make a statement like this? How? You’re 18-22. I got news for y’all, ladies and gentlemen. Kenny Atkinson is doing a hell of a job. Sean Marks, the [GM] for the Brooklyn Nets, is doing a hell of a job. The person that hasn’t been doing their job has been Kyrie, albeit not his fault because he was out for 26 games. When he’s played, he’s averaging 27.

But the point is, considering the fact that you don’t have KD, and they didn’t have you, to be 18-22 led by Spencer Dinwiddie and [Caris] LeVert and {Jarrett] Allen and Joe Harris and the crew – I’ve been very proud of what I’ve seen from the Brooklyn Nets. So the point that I’m trying to make, Kyrie, your statement about ‘we need a piece, everybody can understand that we’re a piece away’ … What the hell are you talking about? That’s why you’re there!

Couldn’t have said it better myself. So I won’t.