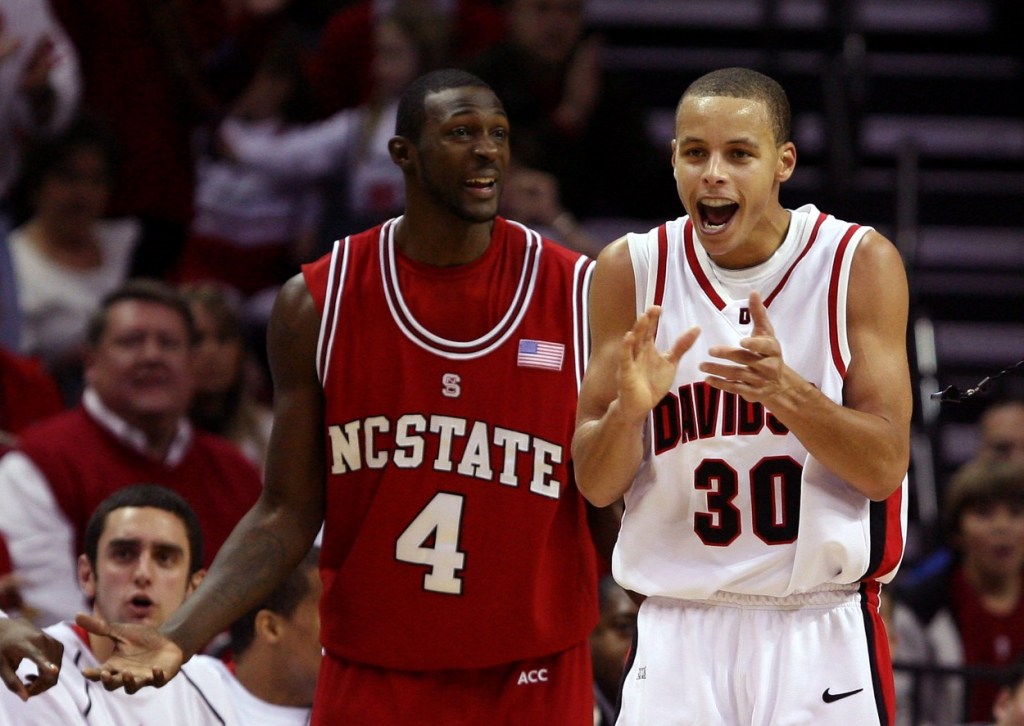 It’s not exactly accurate to say that I had a ‘front-row seat’ to Stephen Curry exploding onto the scene at Davidson College but I was pretty close. My roommate (at the time) was a year ahead of Steph Curry at Davidson and forced us to watch every game Curry played in during that Sophomore season where Davidson was 1 win away from the Final Four.

That same roommate dragged us to a Davidson game at MSG the next season and we were all-in on Steph as being a star in the NBA. So naturally, he made us travel to Boston a year later to watch Steph’s debut against the Celtics as a rookie. Throughout that time I heard some good stories about Stephen Curry at Davidson frat parties but I never once heard an explanation of why Steph went to Davidson instead of a big school.

Stephen Curry was a guest on the Knuckleheads Podcast this week with Quentin Richardson and Darius Miles. They grilled Steph on whether or not the Warriors (with KD) could beat Michael Jordan’s Chicago Bulls, why Curry started shooting 40-footers, and they discussed how he ended up at Davidson College, a top-tier academic school with under 2,000 students.

How And Why Did Stephen Curry End Up At Davidson College?

This segment is at about the 21:15 mark of the episode. The hosts jokingly ask “why’s he at Davidson? Who missed out? What happened? Somebody’s got to get fired because how didn’t we see this?” referring to Stephen Curry setting all-time scoring record for Davidson College and the Southern Conference.

“I loved it because it was a nice balance. Nothing really changed back on campus. We had 1,800 students on campus and so you knew everybody. We know everybody.

So you go play and run the tournament. We beat Gonzaga and Georgetown in the first two rounds and then we get back to campus and it’s like, there’s a celebration but people have class on Monday. And so do we. So we show up and nothing really changes.

And it gave us a nice perspective of ‘let’s keep the main thing the main thing, let’s keep enjoying this moment’ but we still have our culture here and that’s freaking dope. We were representing it to the fullest on the biggest of stages. So I enjoyed it.”

We still need some answers about ‘why’ Davidson…

That doesn’t really explain why Stephen Curry, the son of a former NBA player and an athlete so talented he’d go on to break NBA records, ended up at Davidson College. But there’s a bit of a paper trail out there about that.

As it turns out, Stephen Curry was never offered a Division 1 scholarship from a major basketball program when he was in high school. Curry received scholarship offers from Winthrop, Virginia Commonwealth, Davidson, and his father’s alma mater Virginia Tech. Steph’s decision came down to Davidson and VT and the rest was history.

Stephen Curry isn’t the only famous alumni from Davidson College. The tiny North Carolina school has graduated plenty of pro athletes (and coaches) as well as Woodrow Wilson, the 28th President of the United States of America.

If you want to listen to Steph’s full episode on the Knuckleheads Podcast you can stream it right here, I’ve also shared some time stamps below for you to check out if you want to jump around:

Tomorrow we got superstar @StephenCurry30 choppin it up with us! He has a Public Service Announcement… @playerstribune #knuckleheadspodcast ✊🏾😎✊🏾 pic.twitter.com/D5lM52BRqs

Stop tagging that man with your trash shots!