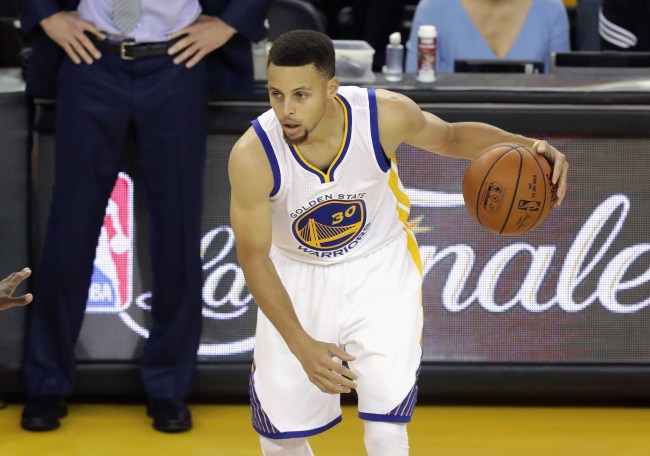 Stephen Curry is, arguably, the greatest shooter the NBA has ever seen, and has helped guide his Golden State Warriors to five-straight NBA Finals. While that may be impressive AF to most of us, the two-time league MVP isn’t satisfied with “just” the three rings — and possible fourth on the way — that he’s got on his fingers. It’s always the one that got away that bothers us the most, right? Well, in Curry’s case, that’s what he seems to think about the 2016 NBA Finals against the Cleveland Cavaliers, because he thinks he cost the Warriors the title.

As we all know, the Cavs became the first NBA team to overcome a 3-1 deficit to win any series, let alone an NBA championship. It took some luck, skill, LeBron James and Kyrie Irving going mental, and both James and Irving to do the miraculous to lead the Cavs to the franchise’s first ever title. And while many remember the iconic block that James had on Andre Iguodala, Stephen Curry remembers the three-pointer that Irving hit over him with 0:53 seconds left — which led the superstar to let his ego get in the way on the next offensive possession, which, he believes, cost his team the championship.

In a piece from ESPN‘s Jackie MacMullan about how superstar athletes adapt to pressure, Stephen Curry revealed his secret; saying he tenses up his muscles before releasing all that energy. He also detailed why he believes that 2016 NBA Finals loss is on him.

His reaction with 53 ticks left on the Game 7 clock in the 2016 NBA Finals, seconds after Kyrie Irving’s surgical 3-point shot had fallen through the strings, was a primal, instinctive response to a lifetime spent swirling in a cauldron of competition and pressure: “I gotta go back at him.”

This, Curry would recognize later, was the incorrect course of action. But in the moment, pride overrode practical sensibilities.

“I’m like, ‘I just need a little space’ — and that’s where I started to rush,” Curry says now. “I look back and think I could have easily gone around [Love] and gotten a 2, and we could have gotten a stop, and then I could come back down and hit another shot, and we win another championship, instead of me going for the hero shot, which I felt like I could make.

“That was a shot where I was not under control. And it cost us a championship.”

It’s wild to think that Stephen Curry truly believes his three over Kevin Love — which Cleveland fans refer to as “The Stop” — was the one defining play that cost the Warriors a title. After all, the dude was the league MVP that year and had the green light anytime he wanted, so it’s not as if many people thought he’d miss over a below-average defender like Love.

But it just goes to show how some superstar athletes are wired, and how, even with all the success Stephen Curry’s had, it’s the losses that haunt him the most.