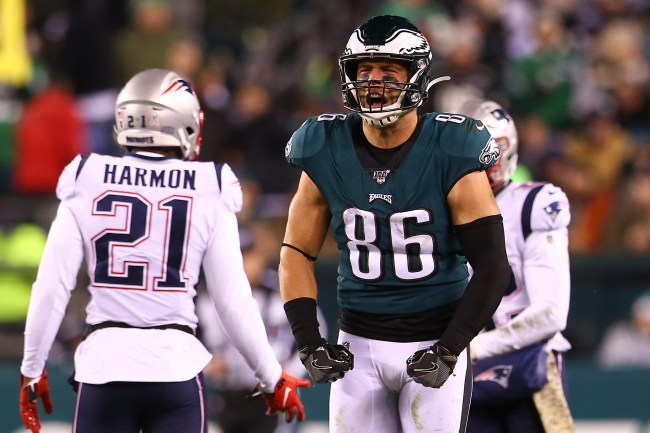 The ironic thing about being a defensive back in the NFL is that typically the better you are, the less we hear your name. Quarterbacks treat elite defenders the way girls treated me in high school: not even looking in their direction. This is why guys like Jalen Ramsey and Richard Sherman are so outspoken, because it’s the most effective way to build their brand outside of quietly eliminated an entire side of the field.

There’s no question that Patriots Pro Bowl cornerback Stephon Gilmore is elite, but his soft-spoken, swag-apathetic approach to the game would make you think that he’s a backup kicker.

So you know when he’s talking shit to the media, he’s got a serious axe to grind.

Following the Patriots 17-10 win over the Eagles on Sunday, Gilmore ripped Eagles tight end Zach Ertz, who finished with nine catches for 94 yards, for whining and crying to the referees when things didn’t go his way.

Stephon Gilmore said he knew he could get Zach Ertz a little rattled because he had seen the Eagles tight end crying on film.

Patriots defense is happy with the job they did frustrating Zach Ertz.

Stephon Gilmore: “He was crying.” pic.twitter.com/KfRwZOhtpp

On Philly’s final third-down snap of the third quarter, Gilmore bodied Ertz with physical one-on-one man-to-man coverage. Wentz threw elsewhere, and Ertz lobbied to the nearest official for a flag. Gilmore and Ertz then had words with each other.

After the game, Gilmore twisted the knife even more by claiming that Ertz isn’t as fast as guys he’s used to covering, so he had to “slow down” to cover him.

Stephon Gilmore broke down how he covered Zach Ertz. Said he had to slow himself down since he usually covers faster players. Even let Ertz get half a step and then close quickly after the route declared.

Gilmore said the plan was for him to cover Ertz on 3rd down. #Patriots pic.twitter.com/moPDpzw5e6

While Ertz was the most productive receiver for the Eagles on Sunday, he didn’t haul in one third down pass, or a pass in Patriots territory.

Ertz has yet to comment on Gilmore’s crying accusations.