Stephon Marbury Goes On Epic Rant About LeBron Calling Himself The GOAT: ‘You Must Be Outta Your Mind!’ 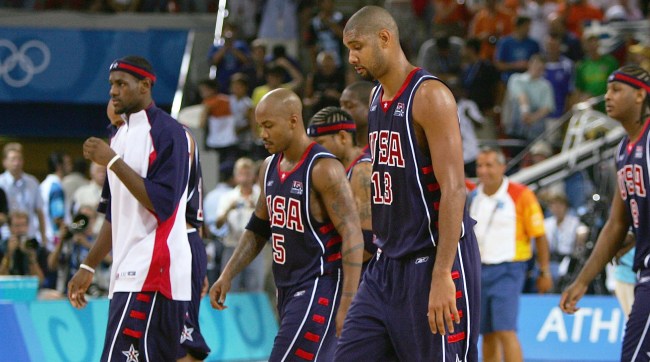 Former NBA star Stephon Marbury was a teammate of LeBron James on the 2004 USA Olympic Basketball team. You know, the one filled with NBA superstars that lost not once, not twice, but THREE TIMES and took home the bronze medal? Yeah, that one. The one that lost by 19 to Puerto Rico, America’s biggest loss in Olympic basketball.

So he feels like he knows James pretty well… I guess.

That’s the only explanation I can think of for the bizarre six-minute rant Marbury goes off on with regard to James recently calling himself the GOAT.

Marbury begins his diatribe by discussing what he observed “on the boat” between a young LeBron, his mom and her boyfriend, at the 2004 Olympic Games.

Marbury continued, “If you ever, in your motherf**king life, disrespect Michael Jordan again… you see what’s happening right now? This movement is not gonna stop. I don’t know what happened when you went to L.A. I think when you went to L.A. they really, really told you, ‘Oh, you’ve arrived, king.'”

He then explains what happens to all NBA players when they go to L.A., the differences between how he grew up in New York City and how LeBron grew up in Akron, all the “Spanish mommies” in Miami, and his beef with Isiah Thomas before circling back to LeBron calling himself the GOAT.

“What were you thinking?” asked Marbury. “You really, really fell for the okie-doke, man. They tricked you again on ESPN.”

“What were you thinking about?” Marbury continued. “You played yourself, nah you didn’t play yourself on a different level… I told you, man, YOU CAN’T SHOOT… LEBRON. How you gonna be better than Michael Jordan? We ain’t talking about me? I’m shit. How you gonna say you’re better than Michael Jordan and you can’t shoot?! YOU CAN’T MAKE A F**KIN’ FREE THROW, MAN! You stand at the free throw line and you fall into the middle of the paint, man! You can’t even shoot! You can’t teach kids how to play basketball , and shootin’ the ball, and don’t know to shoot! This is a real basketball player talking, dude. This ain’t one of your fans. YOU CAN’T EVEN SHOOT! And you talking about you better than Michael Jordan, you must be outta your mind!”