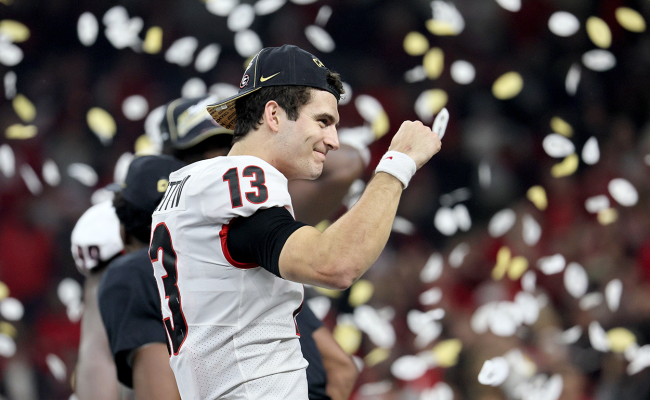 Ever since bringing a national championship back to Georgia for the first time since 1980, Stetson Bennet IV has been a hero in the Peach State. The 24-year-old quarterback had a long, tumultuous journey to the starting job but now he’s living his best life and flying with the Blue Angels.

Bennett, who first joined the Bulldogs as a walk-on in 2017, chose to play a year of JUCO ball after his first year in Athens. While doing so, he lit it up and earned a scholarship to return to Georgia and fill out the quarterback room.

Although the plan was never really for Bennett to start, there were various circumstances that led to him taking over the offense midway through the 2020 season before losing the job again to J.T. Daniels. And then, in 2021, after Daniels got injured as the starter, Bennett took over and the rest is history.

The Bulldogs took down mighty Nick Saban and the Alabama Crimson tide to win its first national championship in four decades.

Since then, Stetson Bennett has been everywhere, doing everything.

He showed up on Good Morning America after partying all night post-national championship, cashed-in on his success with some lucrative NIL deals, and then threw out the first pitch for the baseball team’s Opening Day. In addition, Bennett announced that he is returning to college for his final year of eligibility in the fall is set to be the starter once again.

As a result, he just finished up his final spring practice period with Georgia last weekend and is letting loose. On Friday morning he traded in his football helmet for a flight helmet and took to the air with the Blue Angels. 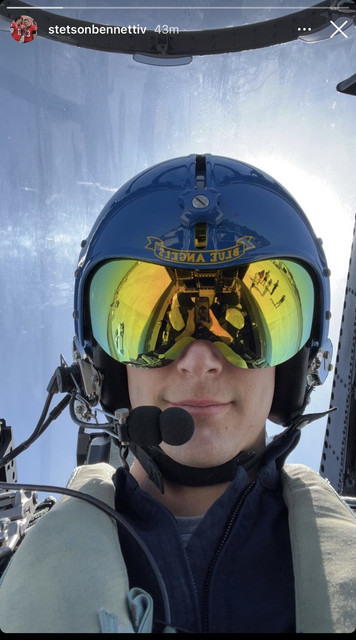 The Blue Angels are set to perform at the Vidalia Air Show in Vidalia, Georgia this weekend. Vidalia is about three hours away from both Athens and Atlanta (his hometown) but Bennett made the trek and joined them in the cockpit.

Stetson Bennett has arrived! He’s one of the riders today with the Blue Angels! pic.twitter.com/wpIi2AzvLO

He did his best Top Gun impression and although he didn’t quite look the part, he was clearly having a blast.

Post-flight photos for Stetson Bennett IV with @BlueAngels in Vidalia. It’s part of the Onion Festival air show this weekend. Hear from him today on @WTOC11 pic.twitter.com/h2xyf32BKr

For a guy who was a walk-on, and then a JUCO transfer, and then someone that college football fans doubted all season before winning a national championship, he is taking the victory lap that he deserves. It will be fun to see if we get any video from Bennett’s Blue Angels flight.