Mets Owner Steve Cohen Gets Mad Online, Outs NY Post “Source” On Twitter, Gives Out Prizes For Guessing Who The Source Was 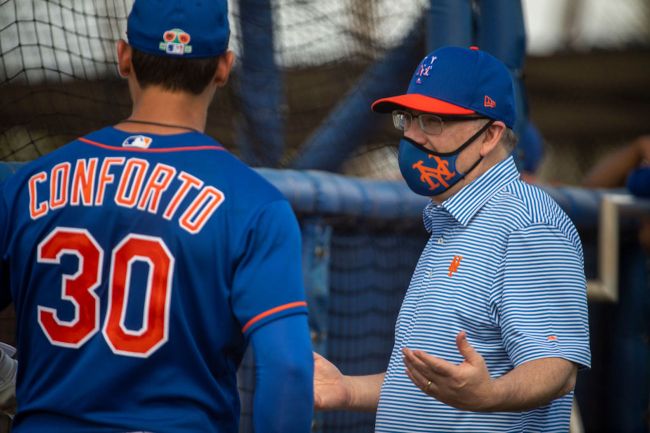 I literally have tickets to the Mets-Phillies game on Sunday night. It was supposed to be a day game, but ESPN — being the morons they are and thinking the Mets wouldn’t collapse by then — flexed it into the primetime slot a couple of weeks ago. Similar to Sunday Night Football towards the end of the NFL season. My Dad got the tickets for the family and me a couple of months ago, and while I love going to games with the fam, I warned my father that putting so much faith in the Mets remaining relevant down the stretch was a BOLD move considering that they are, in fact, the Mets.

Now, that said, am I going to complain about going to a rivalry game on a gorgeous September night with my closest loved ones? Absolutely not. I will point out, however, that I knew buying tickets for a *future* Mets game with the assumption that they’ll still be good was a false step — the only way to buy Mets tickets is *in the moment* when their quality is at least somewhat guaranteed. Expecting the Mets to be good in the future — especially when that future is the month of September, given the team’s history — is like buying tickets for a flight on a plane that’s still being built, it’s the literal opposite of the old adage “hope for the best, prepare for the worst.”

Do you know who doesn’t appear to know that, or at least hasn’t done anything about it since buying the team? Mets owner Steve Cohen! So far, Cohen’s tenure has been mired by three things, all of which are essentially synonymous with the Mets: underperformance on the field, drama off-the-field, and gross mismanagement simultaneously exacerbating both issues.

RELATED: Javy Baez & Co. Tuck Tail, Apologize To Their Employers For “Booing” Them

From Francisco Lindor’s bloated contract to virtually the entire lineup forgetting how to hit, from the firing of GM Jared Porter to the DUI arrest of interim GM Zack Scott, from the “thumbs down” saga to Luis Rojas being allowed to keep his job into July, let alone September: this Mets season has been as uniquely and pervertedly disastrous as any before it. The only thing that’s changed? Our new billionaire owner has a penchant for chirping both the players and the press on Twitter in an effort to appease the fans, instead of doing the one thing they’ve been asking for since Opening Day: firing Rojas. Forget how close to the end of the season we are — this man does not deserve the honor of representing the New York Mets as their manager anymore. Simple as that.

Instead of doing that, though, Cohen logged onto Twitter.com this morning to out — and then reward fans who guessed his name correctly — the “source” who informed New York Post reporter Mike Puma in his article titled: “‘Huge’ Steve Cohen tweeting issue, other missteps could hurt Mets’ search”.

“Insightful” source in Mike Puma’s article in the New York Post today .The person who can guess the source correctly will have the opportunity to sit with me in my suite at Citifield.First one right wins.

We already have a winner

I will take a second and third place winner to keep the game going . I will announce the winners and the “ source” later

Well , Twitter figured it out as usual. The source, who has already put out a pre- denial denial is David Samson.I will have my press people reach out to the 3 winners

Cohen’s response seems to represent a fundamental misunderstanding of what Mets fans, and therefore, New Yorkers, want: we do not care about the trivial bullshit in The Post, all we care about is winning and losing. Right now, the Mets are doing the latter while Cohen’s talking isn’t doing anything to help them get closer to the former. Ever heard of a new manager bounce? Fire Rojas and see if the boys can put together a hot streak to close out the season. Anything other than that is just noise.