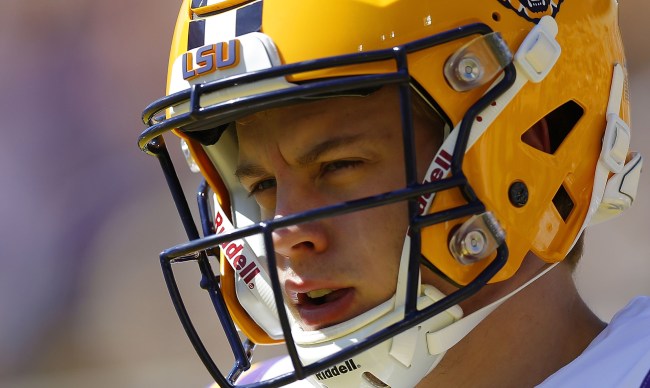 On Monday, some photos of the new $28 million upgrade to the LSU football locker room went viral on the internet.

As is the case with most big-time college football programs (see: Florida, Texas, etc.), LSU went above and beyond.

For instance, the new lockers can be turned into sleeping pods inspired by first-class airplane travel and are stocked with iPads and multiple charging ports for watching game film… in bed, basically.

There are locker rooms… And then there's the #LSU locker room pic.twitter.com/3f7FG8QDu8

And by some people, I mean students, professors and at least one alumnus who currently plays in the NFL.

One LSU student, Cat McKinney, posted a couple of photos showing the stark comparison between the athletic facility and the school’s library.

Ummm… I’m just guessing here, but I bet fixing that wall and throwing some carpet down wouldn’t cost the university $28 million.

“Meanwhile, across campus, I vacuum my faculty office with a Dust Devil I bought at Walmart,” he tweeted. “But, please, Louisiana elected officials, continue to brag that Louisiana higher education is now ‘fully funded.’ By the way, the LSU custodial staff are amazing people and work hard, but they are stretched beyond their capacity to much more than empty the trash, clean the restrooms, mop the floors, etc.”

Meanwhile, across campus, I vacuum my faculty office with a Dust Devil I bought at Walmart. https://t.co/fsVSPhmsOO

By the way, the LSU custodial staff are amazing people and work hard, but they are stretched beyond their capacity to much more than empty the trash, clean the restrooms, mop the floors, etc.

LSU alum and current Carolina Panthers defensive back Eric Reid also found the new locker room to be a bit much, especially considering the players don’t get paid for bringing in all the money that paid for it.

The locker room when I was at LSU 7 years ago was better than the current one in Carolina. But there’s no money to compensate these young men for the revenue they bring to the school #JustSaying https://t.co/hlQtMy8dwd

When his tweet was misinterpreted as either a slam against LSU or the Panthers, Reid clarified.

It’s not a diss at all. LSU is my team. For the things I love, I criticize.

It wasn’t a diss to Carolina either. The locker room is perfectly fine.

Then he went even further, explaining why he thought the new locker room is so wrong.

Hey Emily! You interviewed me for a couple years. Now can I ask you a question? Dont u find it interesting that we can convince people 2 donate millions 2 renovate a facility that doesn’t need renovating? How many scholarships could have been given with the money used 2 renovate? https://t.co/piK2zdQjSc

I am well Justin. Hoping the same for you. It’s great that there’s an endowment put more money in it. Give more scholarships. I disagree that the facility was outdated. Ops pre renovation was more state of the art than virtually every place I’ve trained since leaving LSU. I know https://t.co/QlMOGtbNTT

there are folks who could use a scholarship more than our guys need a tv in their locker. Those who know me know the amount of love I have for LSU. This is too much though...

Hey Michael. I’ve given 10% of my earnings since entering the league to various causes. My point is that instead of $28M to get a bed in lockers when the prior locker room was just fine, that $ could have instead been used to: 1) give folks scholarships or 2) put $ in your pocket https://t.co/92cXiNFIta

Current LSU quarterback, Joe Burrow, however, disagreed, firing back at professor Robert Mann’s tweet in a since-deleted tweet of his own. 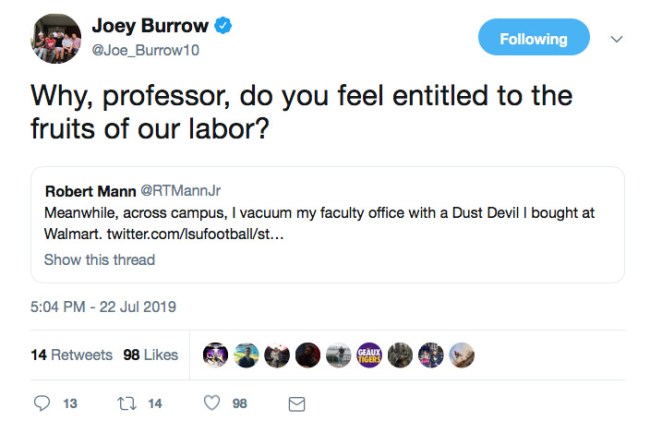 That was a follow-up to earlier criticism he saw the program receiving.

Also the money we bring into the university could have more than paid for it even if we didn’t have such generous boosters. https://t.co/WeO6sYvI48

A great point until you remember 90,000 people don’t show up to watch Sally study for her Accounting 101 class. https://t.co/BoIzqDGnZy

Amateur athletics is so fun.