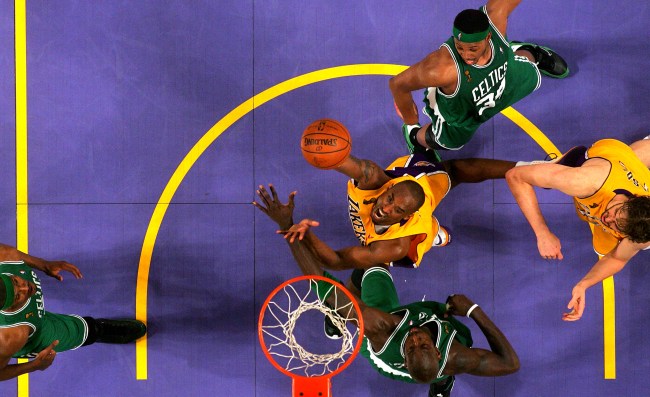 The stories of how driven and competitive Kobe Bryant was during his Hall of Fame NBA career rival only that of his idol Michael Jordan.

With his tragic and unexpected passing back in January many never before heard stories have come to light thanks to the numerous people whose lives Kobe Bryant touched along the way.

One of those people he inspired was WNBA legend Sue Bird.

With June 17th marking the 10-year anniversary of Kobe Bryant winning his fifth and final NBA championship in a hard fought 4 games to 3 win over the Boston Celtics, a story Bird shared a few weeks back resurfaced and it’s pure Black Mamba.

“So the 2008 Olympics was right after he he and the Lakers got beat by the Celtics,” Bird recalled. “So he was like fresh off of that, you could tell. And so one night we were just playing cards, hanging out, drinking some wine, just kicking it, you know, and he saw this newspaper and he saw a picture, it was like something about the Lakers series and buh-buh-bah, and it was a picture of Paul Pierce like celebrating and he literally, he didn’t say a word, he didn’t say anything, but we saw him take the paper, he started cutting out the Paul Pierce picture, he folded it up and put it in his pocket and he was like, “Motivation.” And we were like, ooooh, it never stops with him. You could just tell it never stopped.”

After Kobe lost to the Celtics in 2008, Sue Bird saw him quietly cut out a picture from a newspaper of Paul Pierce celebrating.

Mamba put it in his pocket and said, "Motivation."

Two years later—down to the day—he got his revenge and beat the Celtics.

Bryant already got his fourth NBA Finals victory in 2009 against Orlando, but not only did he get redemption for the 2008 loss to the Celtics in 2010 he also…

What did that fifth title mean to the Mamba?

“Got one more than Shaq.” pic.twitter.com/phSSYD3mX8

Check out Bird telling her Kobe story to ESPN’s Chiney Ogwumike below.