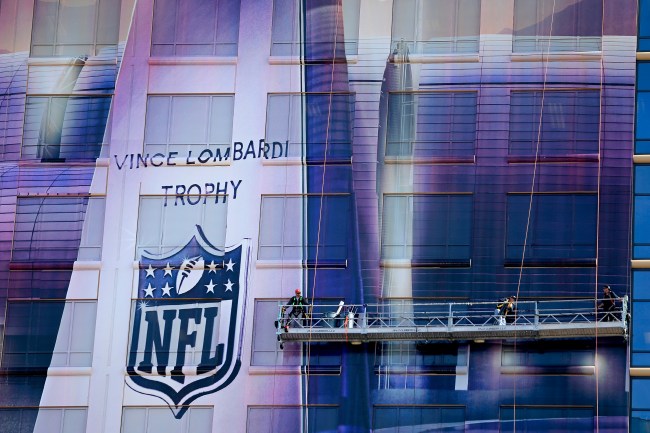 PHOENIX, AZ - JANUARY 28: Workers put the finish touches on a logo for the upcoming Super Bowl XLIX between the Seattle Seahawks and New England Patriots on the side of the Bank of America Tower on January 28, 2015 in Phoenix, Arizona. (Photo by Rob Carr/Getty Images)

30-second advertising spots during the February 4th Super Bowl are selling for more than $5 million (40% of U.S. TV households will be watching), but a collaborative study between Stanford University and Humboldt University (Germany) found that Super Bowl advertisers continue to see meaningful post-game sales during other major sporting events (i.e. March Madness, World Series), within the same calendar year, indicating the spend is worth it. Those that built a social media presence or digital campaign to follow their Super Bowl ad, were successful in keeping their product(s) on the consumer’s mind through baseball season. Companies that were the sole advertiser within a specific product category received the greatest long-term value (see: BUD, PEP). Long-term advertisers received a boost in sales during Super Bowl week, despite the product being purchased before the event (i.e. the ad has yet to run).

Howie Long-Short: Just 10 Super Bowl ad spots remain, so the study is unlikely to impact ad sales (and NBC’s bottom line) for this year’s game. If there are going to be immediate beneficiaries, it’s going to be CBS (rights to ’19 SB) and FOXA (rights to ’20 SB); the rights holders of the next 2 Super Bowls. NBC Universal (CMCSA) said it expects to generate $500 million in Super Bowl ad revenue, a figure in line with the total generated for the last 2 years. Advertisers aren’t worried about the NFL’s declining attendance, that trend hasn’t translated to the Super Bowl; last year’s game drew 111.3 million viewers, the 5th most watched TV event of all-time.

Fan Marino: Mean Joe Greene and Joe Namath participated in iconic Super Bowl commercials, but a lesser known collegiate All-American starred in one of my all-time favorites; Terry Tate as “Office Linebacker”, installing workplace discipline in a 2003 Reebok spot. At 6’5, 300 pounds, with 4.3 40 (yard dash) speed and collegiate All-American (Morgan State) game tape, Lester Speight (his real name) should have been an NFL star; position changes and injuries derailed his promising career. He never played in a professional football game.

The UFC’s 7-year broadcast deal (worth $160 million in ’18) with 21st Century Fox, Inc. (FOXA) is expiring in 2018 and the mixed martial arts promotion is reportedly seeking a new deal worth more than twice as much annually ($450 million). FOXA is reportedly prepared to offer +/-$200 million/year, so it’s possible (if not likely) the UFC will be finding another broadcast home. Should that occur, Dave Meltzer (Wrestling Observer) has indicated FOXA would look to acquire WWE broadcast rights (expiring in September 2019), if not the entire professional wrestling promotion; though it’s been stated McMahon has no intention of selling (owns 41.8% of the outstanding common shares, but controls 82.8% of the company).

Howie Long-Short: NBCUniversal (CMCSA) currently pays $200 million/year for the rights to broadcast WWE Monday Night Raw and SmackDown. The speculation is the next deal will be closer to $400 million annually; potentially twice what the UFC will see. That’s noteworthy because WME paid $4 billion for the UFC in July 2016, $1.5 billion more than the WWE’s current market cap. I think it’s safe to say they overpaid.

Fan Marino: Should FOXA acquire WWE broadcast rights, the prevailing feeling is that RAW would air on network television; with SmackDown moving to FS1. That’s not great news for hardcore WWE fans, as it likely means reducing RAW to a 2-hour program once again (currently 3 hours); Fox affiliates tend to air local news at 10p EST. Speaking of RAW, the 25th anniversary will be held on January 22nd at the Barclays Center. It’s now the longest running weekly episodic show in U.S. TV history.

DraftKings Increasing in Size by 75%, Pivoting to Legalized Sports Gambling?

DraftKings has embarked on “an aggressive hiring campaign”, designed to increase the size of the company by 75% (from 425 to 700+) over the next 18 months; with 600 employees relocating to new office headquarters (still within Boston, but 105,000 SF), in 2019. The announcement comes just weeks after the SCOTUS heard New Jersey’s argument to revoke the federal ban on sports betting; a decision that many have assumed, if it were to go in NJ’s favor, would signal the end of daily fantasy sports. Instead, DraftKings is doubling-down; looking to build on its edge over rival FanDuel and continue to expand internationally (currently in UK, Ireland, Germany and Austria). The private company would not release user acquisition or revenue figures, but says both are up YOY.

Howie Long-Short: CEO Jason Robbins referenced the development of new products and the diversification of offerings in the company’s press release, leading many to assume he’s talking about legalized gambling. While the company owns a valuable user database that would significantly help its transition into the sports betting space, several pro sports leagues (see: MLB, NHL) are invested in the company; complicating a potential pivot. Then again, you don’t increase your staff by 75% to simply license your database; I would expect DraftKings to overcome the hang-ups and look to get-in on the sports betting gold rush.

Fan Marino: While DraftKings focuses on growth, FanDuel focuses on profitability; a goal it expects to reach for fiscal 2018. Why? There are rumors the company is actively pursuing a buyer.