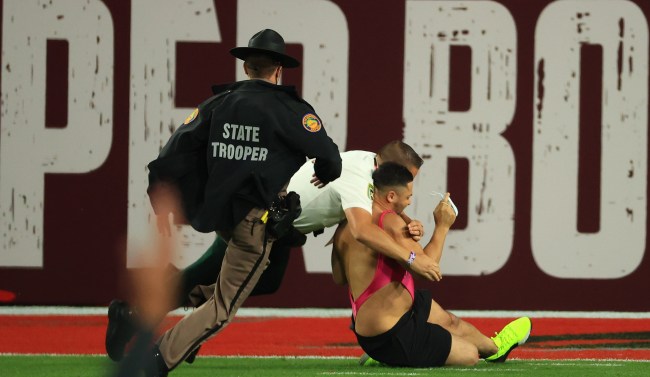 As we now know, the now infamous Super Bowl 55 streaker, Boca Raton native, Yuri Andrade, received what amounts to a slap on the wrist for his stunt.

As stupid as it was, the radio call of the moment by legendary broadcaster Kevin Harlan almost made it worth wasting everyone’s time.

This is why my dad is the GOAT https://t.co/FvfBcFyAWh

Perhaps the most bizarre part of Andrade’s run for glory in the fourth quarter at Raymond James Stadium was the fact that he inexplicably slid at the goal line rather than just taking it to the house and celebrating.

As it turns out, however, that odd move actually just made his stunt even better… once someone took it and turned into a scene from the classic video game Tecmo Bowl. Watch…

That is truly fantastic. I haven’t seen anything this good since the Madden ambulance. They should actually make that part of the real game. Though some people are angry that Tecmo Bowl gave him the score instead of marking him down at the one yard line.

And sometimes you are down at the one and they don’t give you a touchdown and when you line up the very next play the ball is actually lined up on the goal line – WTH?!?

There has also been a rumor making the rounds on the internet this week that Andrade, who was charged with misdemeanor trespassing, placed a $50,000 prop bet at +750 odds before the game that a fan would run onto the field, and then later cashed in his bet, betting him a cool $374,000.

Former oddsmaker and current gambling analyst Todd Fuhrman says the chances of that story being true are almost zero.

I’ve seen this story circulating on social media and wanted to say my .02 cents as the gambling space continues to get polluted

I won’t believe it’s anything but garbage designed for clicks until someone shares the offshore or international shop taking 50k on novelty props pic.twitter.com/NIxLCdLSEF

All in all though, even without the bet, this guy ended up being on TV in from of millions of people, was immortalized in a Tecmo Bowl video, and it only cost a few hours in Hillsborough County jail and $500?