Surfer Kai Lenny Describes Massive Wipeout At Nazaré: ‘You Feel Like A Ragdoll’ 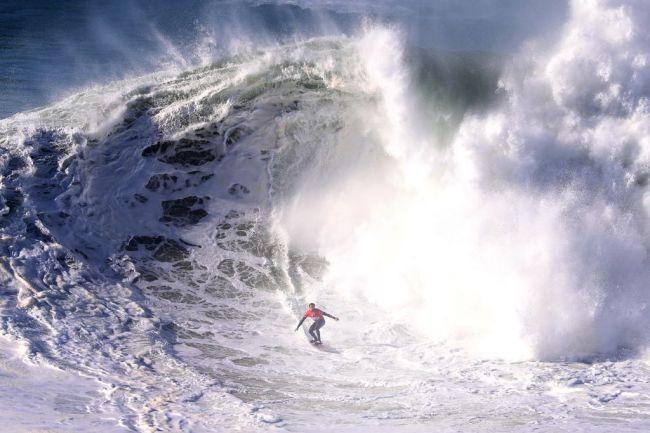 Kai Lenny has surfed some of the biggest waves on the planet, including towing into some gnarly monsters in Nazaré, Portugal.

Last year, Kai went viral when he filmed himself getting pulverized by Nazaré. In his own words, he “got destroyed at Nazaré so you don’t have to.”

Nazaré is the zenith of big wave surfing at the moment. Truly the biggest of the big.

Just this month at the European surf break, North Carolina surfer Mason Barnes shocked the surfing world by riding a wave estimated at 100-feet tall. He called it a “dream wave”, finding it on a “dangerous and tricky day.”

Last year my colleague Cass talked to Kai after the launch of Life of Kai, a series documenting his pursuit to take big wave surfing to the next level on Red Bull TV.

The series is back for a second season, with five fresh episodes capturing Kai’s attempt to “redefine” what’s possible in the water. In the second season, he returns to Nazaré for the winter swell. He also hits up some of the world’s most legendary surf breaks, including California’s Mavericks, a break in Bali, and Hawaii’s Jaws (Peahi) with his brother, Ridge.

He even hits a wave pool in Waco, Texas to show how he’s refining his skills.

I got a chance to jump on with Kai to discuss Life of Kai, including chasing epic waves at Nazaré.

So what’s it like to wipe out at the biggest, meanest surf break on planet earth?

“That was just brutal. You have to pay to play. You can get all the best rides, but at a certain point you have to pay the piper,” Kai tells BroBible.

“In that moment, I had the GoPro in my hand. I figured I might as well just film everything going on. Because when does the cameraman ever die in the movie? So I was just the cameraman,” Kai continues.

“I never felt like I was going to die in the ocean. But it was a moment of total inconvenience when you’re just thinking to yourself ‘how did I get myself into this mess?’ Just thinking about all the things that had to go wrong for me to get absolutely destroyed right now.'”

“But, after it happens, you’re so immensely grateful that it did happen. It just feels so good to have lived through something like that. It’s such a confidence booster, thinking to yourself ‘geez, I don’t want to do that again. But I can handle it. I can handle whatever I’m confronted with again.’  What feels like an hour of suffering is really just a couple of minutes. It makes time feel a little different.”

The brute force of a giant wave is pretty incredible. In the words of a professional big wave surfer:

“The craziest thing about it is that your senses are just completely overloaded. At a certain point, you don’t feel any more pain. It’s like static on the TV. ‘Oh gosh, I got hit so hard by that wave, I don’t know if I can feel more than I just felt.'”

“Sometimes you do come up injured, sometimes you don’t. Sometimes you come up with a really bad concussion just from the compression of the water – going from zero feet to 50 feet below water in half a second… You feel like a ragdoll.”

“There’s no battling. In some weird way, you have to succumb and give yourself over to the ocean and let it take you. You do better that way without fighting it. You try to fight it, you’ll never win that battle.”

Watch Kai describe the wipeout below. Check out Life of Kai Season 2 via Red Bull TV.

Absolutely mind-blowing the stuff these big wave surfers can do.