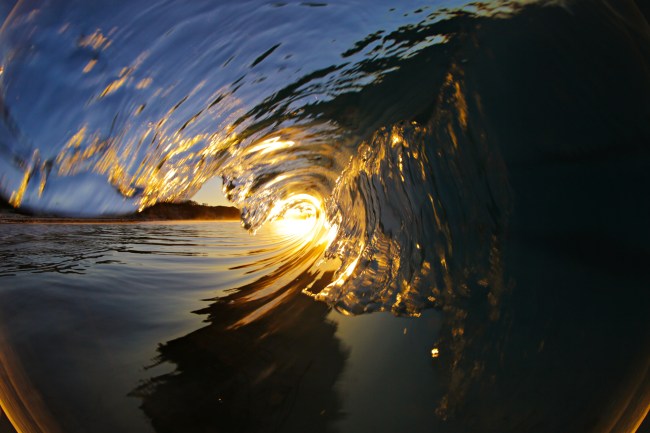 When you wipe out on a wave all hell breaks loose in an instant. You can go from serenely gliding across the water on a surfboard, one with the ocean, to upside down and sucking water into your lungs in an instant. Even the tiniest waves can have brutal wipeouts while heavy-pumping waves can be fatal.

This video began making the rounds on the Robbie Crawford Arts Facebook page this week and it shows surfer Mikala Jones wiping out after bailing on a wave deep inside of the barrel. He’s surfing while holding a 360 GoPro Fusion camera which captures a surreal of image of what it looks like when the surfer loses his surfboard inside of the wave and the world is about to be flipped upside down in an instant.

The footage shows Mikala catching the wave, getting sucked too deep in the barrel, and bailing out. Then they went back and did some reframing in post-production to capture a 360-degree view of what’s going on inside the wave at that moment of chaos. It’s pretty awesome to see this moment of dread filmed like this:

Here’s the caption from Robbie Crawford Arts on Facebook:

Not sure about you guys but I personally feel this is one of the most incredible perspectives of a wipeout ever captured … thanks in part to Mikala Jones being an absolute monster in the barrel as well as the #GoProFusion capturing things in ways impossible with other cameras!!! The camera actually flew out of Mikalas hand but because it captures everything I was able to control composition in post using the reframe plugin … it’s just phenomenal technology … oh yeah … stoked Mikala had the camera attached to a string on his trunks

According to For The Win, this footage was actually shot in Mexico back in January but just started making the rounds this week.