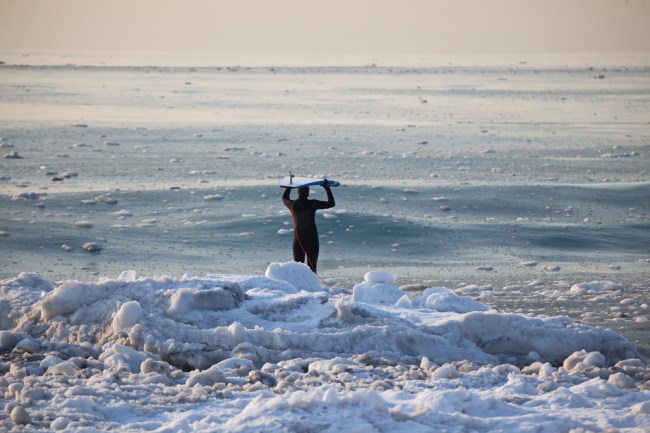 Chances are you have seen pictures of ‘Slurpee Waves’ before. It’s a phenomenon which occurs in the Northeast and New England when temperatures plunge into the single digits and the salt water begins to freeze. Then, when a big storm comes through and the waves pick up from the storm front we get these fascinating Slurpee waves which are half water-half ice, and totally gnarly.

You have to be certifiably crazy to go surfing in single-digit weather. This requires super-thick and very expensive wetsuits. It also requires the type of person who is crazy enough to go surfing in a heavy winter storm when the lifeguards are all sitting at home and staying warm by the radiator.

The ‘Bomb Cyclone’ caused some temperatures throughout the Northeast to be colder than Mars but that didn’t stop some surfers in Nantucket from paddling out in the frigid conditions. This all went down on January 2nd at Nobadeer Beach in Nantucket:

I guess it’s worth noting here before you watch the clip that not every wave surfed is one of the ‘Frozen Slurpee Waves’ because the Slurpee Waves tend to be held together in large pockets. But holy shit, these guys are insane.

I was just in Portugal last week and witnessed some of the largest waves I’ve ever seen in my lifetime. Waves taller than buildings. And I still think that surfing these frozen Slurpee Waves in Nantucket is crazier than surfing giants in Portugal.

(h/t The Inertia and JDN Photography)