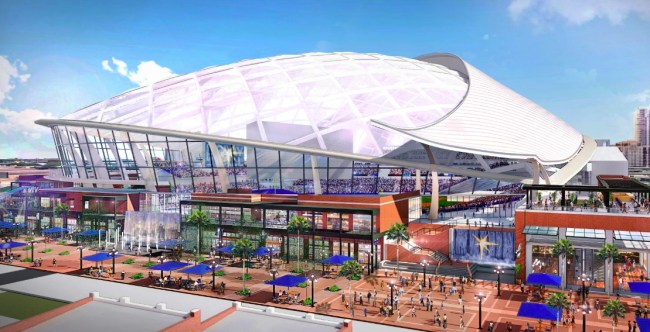 Today, the Tampa Bay Rays unveiled the long-awaited plans for a new $892 million stadium they plan to build in the historic Ybor City neighborhood, a stadium that has been a decade in the making.

The proposed ballpark would have 28,216 seats, with a total capacity would be 30,842–making it the smallest stadium in baseball. It will have a translucent roof priced at $244 million, as 61% of home games are affected by rain. Plans also include a  sliding glass exterior walls to “bring the outside in.”

“This is not a stadium. This is a ballpark,” Rays’ Sr. Vice President Melanie Lenz said.

According to ABC, “seating areas would include swivel seats, picnic suites, a sand berm, a touch tank and family table seating. Plus, there will be room for about 2,600 to stand.” And fountain seats!

And there are “fountain seats” #Rays pic.twitter.com/2EhSkUFzLf

Like Tropicana Field, the ballpark will be climate controlled and include artificial turf.

There is one itsy bitsy problem: no one knows how the hell its going to get paid for.

#Rays Prez Brian Auld says team has no answers on how to pay for $892 million ballpark tab. Says its a "very compelling investment opportunity" for everyone in the room and is open to creative funding.