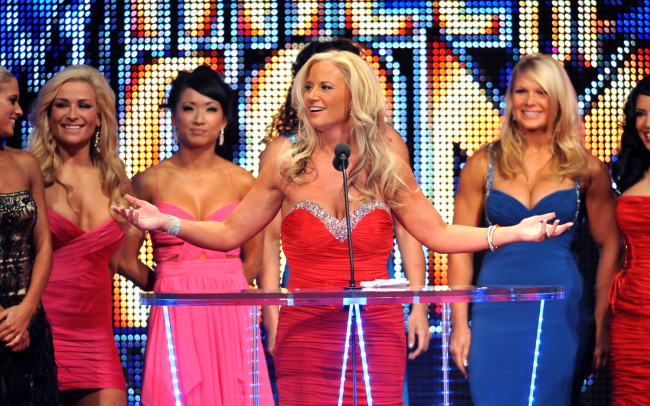 Tammy Lynn Sytch, a 2011 WWE Hall of Fame inductee, has once again found herself in trouble with the law.

On Thuresday, the woman known in wrestling as Sunny was arrested in Keansburg, New Jersey and charged with two counts of third degree illegal possession of a weapon and one count of fourth degree making terroristic threats.

The 49-year-old Sytch was reportedly taken into custody at 11 a.m. local time and booked into the Monmouth County jail.

TMZ reports that the weapon Sunny was charged with possessing does not appear to be a firearm, but it isn’t clear what it was.

The media outlet also quoted a New Jersey statute that defines making a terroristic threat as follows: “A person is guilty of a crime of the third degree if he threatens to commit any crime of violence with the purpose to terrorize another or to cause evacuation of a building, place of assembly, or facility of public transportation, or otherwise to cause serious public inconvenience, or in reckless disregard of the risk of causing such terror or inconvenience.”

Tammy Sytch, who worked for not only the WWE, but also ECW, WCW, and several independent promotions, faces anywhere from 10 to 16 years in prison if convicted on all charges.

Since leaving wrestling, Sytch appeared in an adult video titled Sunny Side Up: In Through the Backdoor and most recently operated an account on OnlyFans where she posted explicit photos and videos.

Sadly, news of her latest arrest did not come as a great surprise to many wrestling fans.

At this point, it would be more of a news story to report the times she's not been arrested.

Is there anyone trying harder to get an episode of Dark Side Of The Ring made about themselves?

It's been awhile since she's been arrested, I was starting to get worried.

Cops say WWE legend Tammy Sytch — aka Sunny — allegedly threatened to kill her "intimate partner" with a pair of scissors before she was arrested on Thursday, TMZ Sports has learned. https://t.co/T6et8qOEri