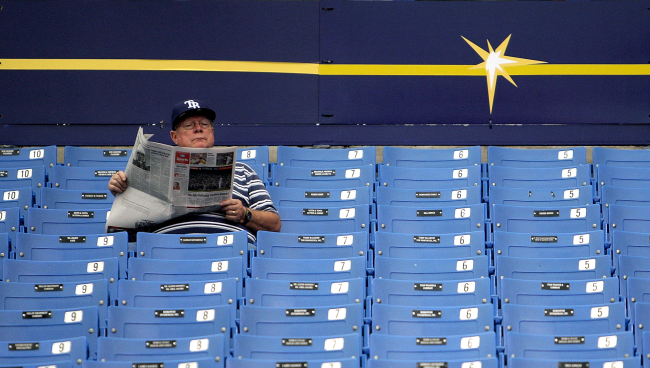 The attendance at Major League Baseball parks in Oakland, Miami, Baltimore, Toronto, and Pittsburgh are an embarrassment to the league. None of those places are a bigger joke when it comes to drawing fans, however, than Tampa Bay.

In the 24 year history of the Tampa Bay Rays, the team has made the playoffs seven times. By comparison, the Chicago White Sox have made it into the postseason 11 times in 121 years. So it’s not like the fans in and around Tampa have nothing to root for down there.

In 2021, the Rays made the playoffs for the third years in a row and over the past four seasons have posted a regular season record of 326-220 for a 60 percent winning percentage.

And yet, there the team was, third from the bottom in attendance out of all the teams in Major League Baseball with a paltry average of 9,396 fans per home game.

The season high for fan attendance at Tropicana Field in 2021 was 23,783. The Los Angeles Dodgers and eight other MLB teams averaged more fans than that over 81 games.

No team in MLB has been better over the last several years and drawn less fans than the Rays. In fact, no Major League Baseball team in the league’s 118 year history has ever won 100 games in a season and finished second-to-last in the American League in attendance like the Rays did in 2021.

Just wanted to make sure it wasn’t a late-arriving “crowd” to see 1st-place #Rays in 1st home game since Aug. 4. This is the 4th inning scene. pic.twitter.com/0VUpzAKMsu

So last year, when MLB Commissioner Rob Manfred said the best way keep the Rays in Tampa was for them to play part-time in Montreal, it almost made sense. Almost.

Considering the two VERY different tax situations in Florida versus Canada, not to mention the logistics of travel, and the requirement to have two homes – in two different countries, it didn’t seem ideal for Rays players.

That isn’t stopping the team from continuing to pursue the idea though, according to a new report by the Tampa Bay Times.

The Rays are likely to seek the blessing of baseball’s executive council this week to transition from the current exploratory plan to a more definitive pursuit of the shared city idea.

Going this route would accomplish several things at once for the Rays. It would reconfirm the franchise’s commitment to Montreal politicians and developers who are getting antsy about their up-in-the-air stadium plans near the city’s waterfront. It would also be a shot across the bow for Tampa Bay politicos who remain leery of the team’s sincerity about the split-season plan.

And, if the executive council agrees, it would be a tangible sign that Major League Baseball’s owners are seemingly losing faith — if it hasn’t already evaporated — in Tampa Bay’s ability to be a permanent, full-time home for the Rays.

Team president Brian Auld recently explained why they are still considering this plan.

1. Tampa Bay and Montreal are both flawed markets but combined could generate enough revenue to allow the Rays to be a mid-tier team in terms of revenue/payroll.

2. Building smaller, boutique-style stadiums without roofs in each market would be less expensive and, thus, minimize the risk for municipalities that would be asked to contribute roughly half the cost.

3. The alternative is no Major League Baseball.

For what it’s worth, the Rays, who are exploring the idea of an open-air stadium in Ybor City during the first-half of the season and playing the second half in Montreal, will finally be free from their 30-year agreement with Tropicana Field in the year 2027.