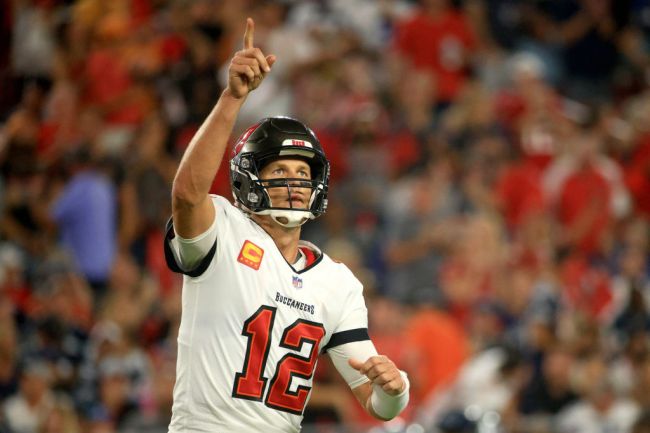 The opening game of the 2021 NFL season lived up to the hype. As Dak Prescott and the Dallas Cowboys rolled into Tampa Bay to take on Tom Brady and the reigning Super Bowl champions, history was made.

It was a high-paced game that went back-and-forth, primarily through the air, all night. As a result, it offered the opportunity for a pretty hefty box score.

Tom Brady attempted 50 passes and recorded 379 yards and four touchdowns, including his 99th and 100th to Rob Gronkowski. He threw two interceptions on the night, but that didn’t stop him from getting the dub.

In fact, his record when throwing two or more interceptions is pretty impressive. Despite his struggles, the GOAT just finds ways to win games.

Tom Brady is 25-29 in his career when throwing 2+ interceptions.

That notion of digging deep to win games was certainly true on Thursday night. In fact, it was a historically hilarious loss for the Cowboys, who are now 0-6 against Brady in his career— the most losses in the regular season against a singular quarterback in team history.

Dallas forced four turnovers, had more than 450 yards of offense, completed more than 50% of its third down conversions and recorded 25 first downs. And yet, in typical Cowboys fashion, the kicker left at least four points on the field and they lost.

In the victory, Tampa Bay stands alone in the NFL record books.

Buccaneers are the first team in NFL history to lose the turnover margin by at least 3, incur 100 penalty yards, allow 450 yards, and still win the game.

As if that wasn’t enough, Brady continued to re-write the history books on his own. In addition to his undefeated record against Dallas, he engineered his 49th game-winning drive in the 4th quarter or overtime. He is now third all-time in the category, four behind Drew Brees and five behind Peyton Manning.

Although he didn’t pass Brees in game-winning drives, he did pass Brees in another statistical category. His four touchdown passes on Thursday moved him past the former New Orleans signal-caller to hold the title of most passing touchdowns in a season opener in NFL history with 43.

Brees previously held the record with 41.

All of this goes to say that, on top of a quality comeback win, the Tampa Bay Buccaneers and Tom Brady continue to make history and look dangerous, once again. The GOAT continues to be just that and will continue his chase for back-to-back rings against the Falcons in Week 2.