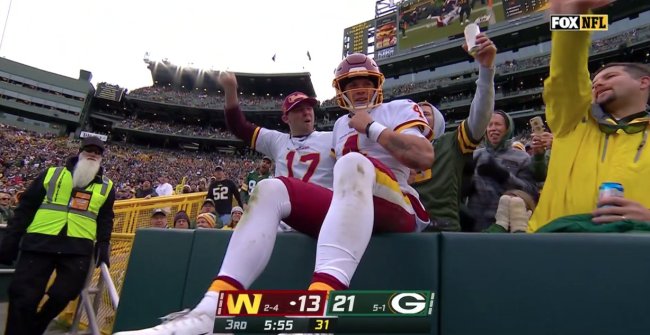 Washington Football Team quarterback Taylor Heinicke grew up a Packers fan. He has likely always dreamed of doing a Lambeau Leap like he did on Sunday.

However, in this case, it was for a different team on a touchdown that didn’t count. It was super awkward.

With his team trailing 21-7 late in the third quarter, Heinicke appeared to score a rushing touchdown on 3rd-and-goal from the 3-yard-line. He took the snap, dropped back in the pocket, and then ran through a wide open lane to the end zone.

I’m not sure why Heinicke dove on this play. He would have walked into the end zone had he just kept running. This is one of the many reasons why he’s not the long term solution at QB for the @WashingtonNFL. #heinicke #WashingtonFootball #packers pic.twitter.com/seAqhhJrQW

Although it looked like six points, Heinicke dove head-first right before the goal line and replays showed that his knee was down before the ball broke the plane. 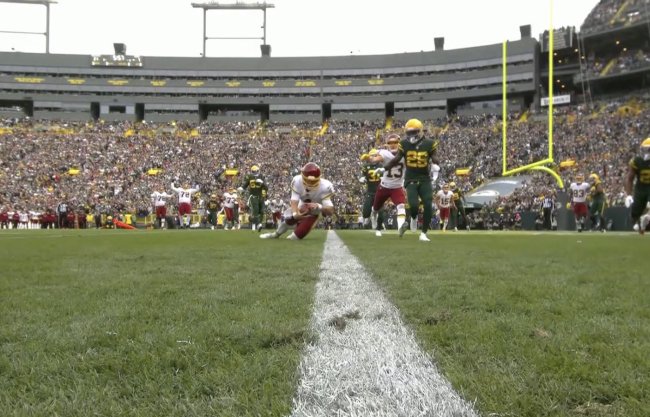 Per a fairly new NFL rule, a quarterback diving head-first is considered “giving himself up,” just like sliding to avoid contact. Thus, he was ruled short and the touchdown didn’t count.

To make things even more embarrassing, Heinicke ran to the stands, found a Football Team fan and did the Lambeau Leap. It is a move that is typically frowned upon from opposing teams and he was booed ruthlessly by Green Bay faithful.

Shortly thereafter, the touchdown was overruled.

On the next play, 4th-and-goal from the 1-yard-line, Heinicke ran a quarterback sneak. He dove toward the end zone, fumbled, regained possession, and was stopped short.

The Packers forced a turnover on downs. AWKWARD.

#Packers with a 4th down stop from the 1.pic.twitter.com/tc1YbS1ZAc

The entire thing could have been avoided if Heinicke had just walked into the end zone. Tough.