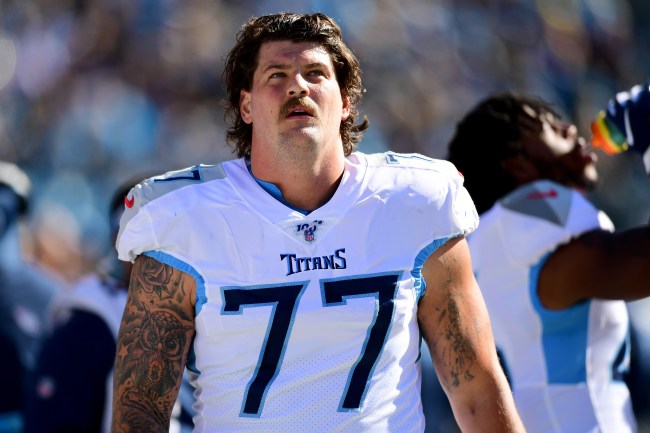 The Tennessee Titans beat the Kansas City Chiefs in a sentence I didn’t think I’d write and in a game I am so glad I didn’t bet on.

Tennessee’s 35-32 comeback win was nearly derailed by a trio of second half penalties by veteran offensive tackle.

The three-time Pro Bowler was whistled for for unnecessary roughness and holding on back-to-back plays in the third quarter and a false start in the fourth turned a third-and-5 into third-and-10.

After the win, Lewan preemptively addressed his penalties to a small army of reporters huddled around his locker.

Taylor Lewan tee’d off on himself for his penalties. #Titans pic.twitter.com/yBpmOhQKmH

“Before we even start this whole thing, my penalties are a (expletive) problem,” Lewan said. “I am 10 % an issue with that. It’s not intentional. I do not mean to do it. My intentions are good. I’m just trying to finish. And it’s killing the team. I know that. You guys know that. No one needs to call me out on anything, because I got it.

“I am completely screwing the team with the amount of penalties I’ve had in the last, what, six games. It’s crazy. It’s horrible. I cannot get penalties. I’m sorry, there’s no need to ask about it because I know I’m an absolute liability when it comes to penalties.”

In just six games Lewan’s played this season (he served a four game suspension for violating the NFL’s performing enhancing substances policy), Lewan’s team-high nine penalties have resulted in more yards (69) than by any other player on the Titans, ESPN reports.

“I take full responsibility for this. I will work on it. I might even go practice not doing penalties in this bye week,” Lewan said. “I will do my absolute best to work on it. I won’t even hold my wife’s hand this whole entire bye week because I don’t want to get called for holding. These damn penalties are absolutely kicking me in the ass.”

Lewan should thank Titans guard Rodger Saffold for deflecting all the blame, allowing more sacks this season than he did all of last season after securing a four-year, $44 million contract this past offseason.

I think I’m the most hated guy on the @Titans Win lose or draw it’s just nothing but negativity and insults. Mistakes happen in this game we all know that but without knowing scheme or the way we play to judge instantly is just unfair. I mean we just beat a top AFC team enjoy it.