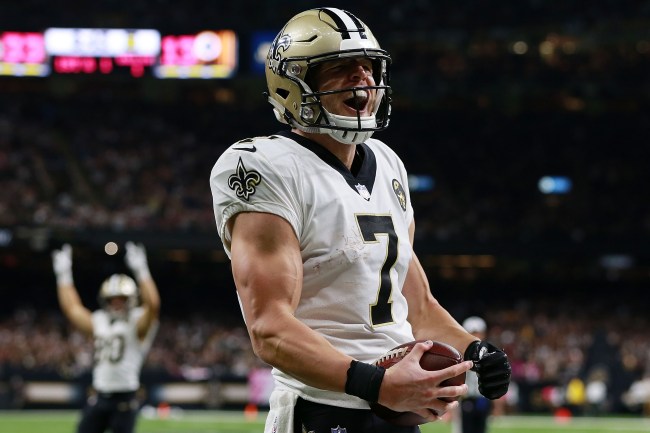 Taysom Hill is like a mythical creature within NFL circles, with the dynamic New Orleans Saints player showing his athleticism at position’s like quarterback, running back and H-back. While Hill’s excelled at bouncing around to different spots on the field, nobody knows for sure what he can do yet — which is part of the intrigue that surrounds him.

Don’t get me wrong, Hill brings a certain flair and toughness to the gridiron, and plays like a bulldozer anytime he’s got the football in his hands, but, because he goes so hard on a limited number of snaps each game, the question is if it’s sustainable. We’ve seen him come out unscathed in his first two seasons in the league, but what if he were a starting quarterback trying to play that style? Would all the unnecessary or extra hits take a toll on him? Probably, but nobody really knows for sure, because the dude is just built differently.

While people all around the league debate whether or not Taysom Hill is a star in the making or just a secret weapon as a complementary piece, one guy is fully aboard the Hill train, offering up such praise that it’s actually getting ripped apart by people on Twitter.

That person? Former NFL outside linebacker Brady Poppinga, who recently said that the reigning NFL MVP, Lamar Jackson, is actually a “poor-man’s Taysom Hill. It’s not the other way around.” Take a look below at Poppinga’s bold proclamation.

“Lamar Jackson is the poor-man’s Taysom Hill. It’s not the other way around. That’s what we have in Taysom. That’s why the Saints aren’t messing around. He eventually will be taken care of.” – @BradyPoppinga pic.twitter.com/dW66eAE7S5

Considering the fact Lamar Jackson just completed a season in which he guided the Baltimore Ravens to a 13-2 record in his 15 starts, threw for 3,127 yards, passed for 36 touchdown compared to just six interceptions, and, oh yeah, added another 1,206 yards rushing with seven touchdowns on the ground, Poppinga’s claim seems to be a little bit too ballsy for most people. As you’d imagine, Twitter had a field day after hearing what the former NFL player had to say, so take a look below at some of the reactions.

Poor guy got that CTE

I love Taysom Hill, but all this negative talk about Lamar Jackson has to stop. How can we say the reigning MVP is a poor man’s version of a QB that hasn’t started in the NFL https://t.co/GXwMokJrLZ

Look, we’re all entitled to our own opinions, but this one is way too far out in left field for anyone to really support. Yes, Taysom Hill is a good player who has excelled in his role with the Saints, but the dude has never once started an NFL game, so it’s ridiculous to think he’s better than Lamar Jackson — who has proven to be a superstar in the making. This take from Brady Poppinga’s ignorant and all sorts of attention-starved, and is wrong in every sense of the word.