Rex Ryan Says You’re ‘An Absolute Idiot’ If You Criticize Lamar Jackson After Loss To Titans, And He’s Not Wrong 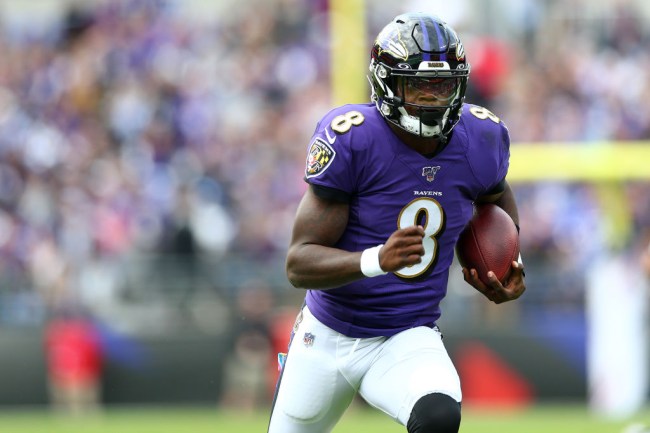 The Titans pulled off quite the upset on Saturday night stunning Lamar Jackson and the Ravens by the count of 28-12. With that scoreline and Baltimore being held to just 12 points, it’s easy to point fingers at Lamar Jackson as to why the Ravens’ season came to an abrupt end.

Sure, Baltimore’s offense wasn’t clicking in the same way we grew accustomed to seeing throughout the regular season, but Jackson’s performance shouldn’t be the main focal point behind the loss.

Just listen to the take that Rex Ryan laid out on Monday on ESPN’s Get Up. The former head coach simply said that if you criticize Jackson then you’re ‘an absolute idiot,’ which may seem a bit harsh, but that doesn’t mean it isn’t a true statement.

After the MVP caliber regular season Jackson put together it’s easy to forget that this was just his second season in the NFL, which is a scary thought. On top of that, Jackson finished the game with 365 passing yards, 143 rushing yards, and a touchdown. Sure, he threw two interceptions, but the first he threw should have been a completion as Mark Andrews had the very catchable ball bounce from his hands into Kevin Byard’s hands.

Let’s also not downplay the fact that this Ravens defense gave up over 215 yards on the ground on Saturday.

One other thing that’s being overlooked in all of this is just how strong this Tennessee team is. No, this Titans team isn’t the flashiest team out there by any means, but Derrick Henry’s rushing ability on top of Ryan Tannehill’s timely completions and a talented defense it’s time to start tossing a little bit of credit in their direction.