Taysom Hill Says He Expects To Be Viewed, And Paid, Like A Franchise Quarterback, But Is He Worth It? 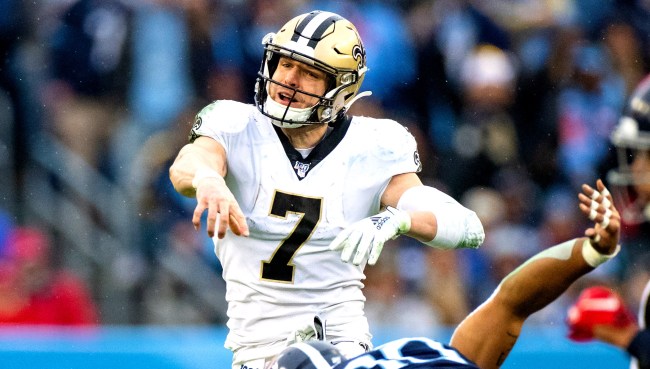 New Orleans Saints quarterback/running back/tight end/kick returner/special teams player Taysom Hill is a restricted free agent heading into the 2020 NFL season and he says that going forward he expects to be viewed like a franchise quarterback.

The 29-year-old jack-of-all-trades went undrafted in the 2017 NFL Draft, was signed as a free agent by the Green Bay Packers then cut. He was shortly thereafter picked up off waivers by the New Orleans Saints, but was used as a returner and special teams player, not throwing a pass his first season.

And yet, “I definitely view myself as a franchise quarterback,” Hill said during Super Bowl week. “I think as you look at the other questions… is it New Orleans? Is it somewhere else? As you go into free agency, this is time that you find out how people view you and we haven’t gotten into free agency long enough to know how these guys view me and we’ll just handle it as it comes.”

“Do I want to leave? The fact of the matter is no,” he added. “But as you look at free agency, you have to find the right opportunity for you. You have to find the situation to take care of your family. I want to play quarterback in this league. If New Orleans don’t view me that why, well then I have to leave.”

Hill did say that he hopes Drew Brees comes back and plays in 2020 and Brees has even gone so far as to tell PFT Live, “If I’m back, and Taysom’s along side me, call the plays that puts us in the best position to win. If that means Taysom Hill is taking 30 snaps a game, 25 snaps a game, so be it. I’m all for that.”

I see Taysom Hill trending. He told me Super Bowl week: "I definitely view myself as a franchise QB. .. If New Orleans don't view me that way then I have to leave." Also he loves playing with Drew Brees, hopes to continue doing so. Full interview: https://t.co/CZvuLzPHyQ pic.twitter.com/KQLpsWuYAH

The Saints are expected to place a first-round tender on him, so if Hill does get an offer from another team – something coach Sean Payton says he expects to happen – if that team signs Hill they will have to give New Orleans their first-round pick.

That’s a pretty high price to pay for a guy with six completed passes in three years.