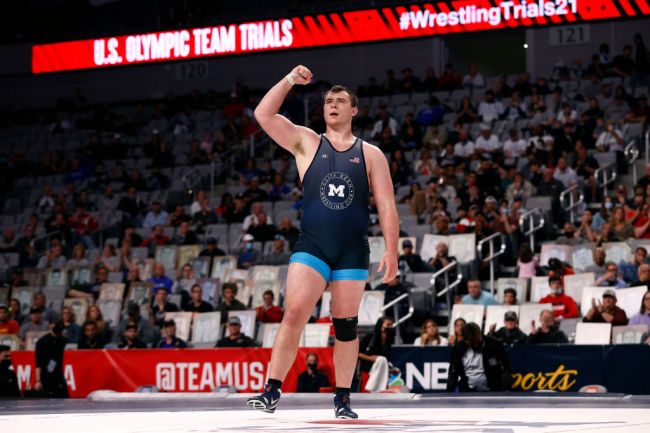 The Titans just beefed up their offensive line with someone who has not played football since high school. Tennessee announced on Friday that the team has signed three-time All-American wrestler Adam Coon to its roster. He has not stepped foot on the gridiron since graduating high school in 2013.

Coon, who missed out on qualifying for the 2020 (in 2021) Tokyo Olympics, compiled a 116-15 record for Michigan in college, but he did not play football for the Wolverines. His .885 winning percentage ranks sixth in program history and he ranked 22nd in total wins. By the end of his career he was a two-time NCAA finalist.

In high school he was a four-time state champion in wrestling at Fowlerville in Michigan, and was an all-state linebacker in 2012. He was also an all-state honorable mention on offensive line in 2010 and 2011.

The 26-year-old certainly fits the mold. At 6-foot-5, 300(ish)-pounds, Coon will be the fourth-largest player at the position of those listed on the team’s depth chart. He’s a big fella.

While a transition from wrestling back to football for the first time in eight years might seem like a difficult task, his physicality will not be an issue. He has a general sense of the technique, having played the position growing up, and his freak-of-nature strength will translate.

Look at him absolutely manhandling his opponents in college.

The list of wrestlers to beat No. 1 Kyle Snyder just grew. pic.twitter.com/w86eqJT339

Adam Coon was on the mat just :40 seconds tonight. pic.twitter.com/XEaGyZ9Hyw

Coon’s hiatus from football was likely not a case of him not wanting to play the game in college. It had everything to do with him being absolutely dominant as a wrestler.

He earned a spot on the U.S. men’s team earlier this spring and traveled to Bulgaria for a qualification tournament in May. Coon ultimately lost to Ukraine’s Mykola Kuchmii in the 130-kilo Greco-Roman quarterfinals and decided to test the waters as an NFL free agent. The Titans were quick to scoop him up for OTAs and training camp, at a minimum.

Should the experiment not work out, it would not be a big loss to Tennessee and his brute strength is worth the flier.