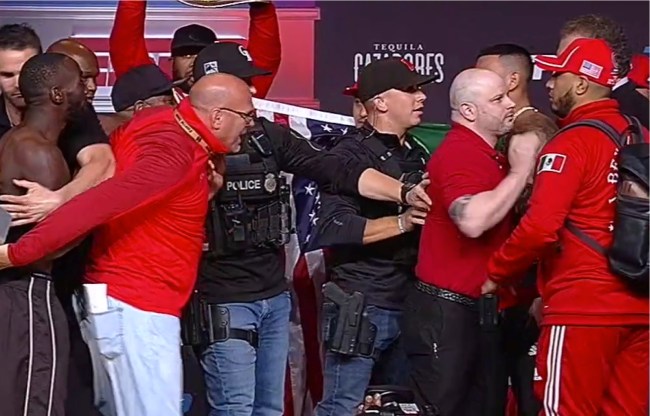 Whether you’re a boxing fan or not, one of the most anticipated fights in a long time is tomorrow night between Terence Crawford, whose got a 33-0 record with 24 KOs, and Jose Benavidez, who’s sitting at 27-0 with 18 KOs. It’s expected to be a serious bout, with the hatred between the two being real AF.

As if many sports fans needed a bigger reason to get hyped for the fight between Crawford and Benavidez, during today’s weigh-in in Omaha, there was a dust up between the two during the stare down that nearly resulted in the first punch being landed. Take a look at what happened after a little shove from Jose Benavidez on Terence Crawford.

💥 Jose Benavidez Jr shoves Terence Crawford, who responds by throwing a punch, at their weigh-in. pic.twitter.com/euevbVMpXP

Whoa, I’m not sure Crawford was really playing around with that.

Now, I know this type of shit always seems to happen at weigh-ins, with many fans wondering how a dude who’s trained to beat the shit out of someone can miss a gimme from mere inches away from his opponent, but, hey, it causes good drama leading up to the actual fight.

All that said, ESPN.com gave a pretty awesome preview of the fight tomorrow, and, while some weigh-ins include acting, it sure seems as if this one between Terence Crawford and Jose Benavidez was 100 percent legit, ’cause they really hate one another.

“Beating him, I hope I’ll get a little respect,” Benavidez said. “But I don’t care what people think. I know I’m gonna beat him, and I know what I’m capable of. I’m gonna shock the world.”

“I don’t see anything special in Terence Crawford. I don’t see why everyone’s scared to fight him,” he said. “I’ve been sparring Manny Pacquiao since I was 16 years old, [I sparred] Timothy Bradley, I sparred Amir Khan, Shane Mosley, Shawn Porter. To me, Terence is really not that special. He’s beatable, and I’m going to show him.”

Crawford then replied with this:

“Once he feels them punches going upside his head, I don’t even know if he’s going to want to stand there next to me.”

“It’s been real since Day 1, since the fight has been announced. It ain’t been nothing but real,” Crawford said, adding that no matter what happens in the fight on Saturday, he will not shake Benavidez’s hand afterward. “I’m just going to go out there and shut him up. That’s it. That’s all.”

As if the words from the fighters themselves weren’t enough, here’s what Top Rank president Todd duBoef had to say about the hatred between each.

“These guys have had some public words … and I think this thing is very much a personal battle,” Top Rank president Todd duBoef said. “Benavidez has been, from when we took him out of the amateurs, very highly skilled and has had a nice career. And this is his defining moment.”

Many believe that Crawford is considered the gold standard in boxing right now, and his challenger, Benavidez, is looking to make a name for himself, knowing that this is his opportunity to become a more household name. Here’s to hoping the fight lives up to the billing.