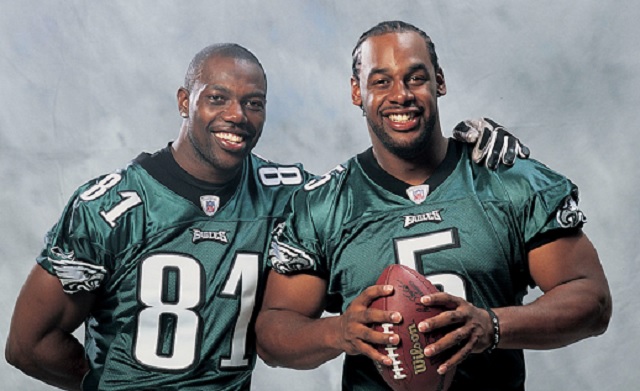 Last year during an appearance on Bleacher Report’s Untold Stories with Master Tes, McNabb said that he felt Owens was responsible for breaking up the Eagles in 2005 and prevented them from returning to a Super Bowl.

“The lead-in to the following year I’m thinking he’ll be back healthy, you know? We had Free, we had guys that were just elevating their game, gaining experience, we’re going to be back,” said McNabb. “So, the off season goes through and all of the sudden there’s turmoil here there are conversations going back and forth and we had to answer those questions instead of focusing on what we need to do in order to get back to where we were and I thought that was the major distraction for us.

“I’m just sitting there, I’m watching on TV and Brian Dawkins and Trotter were my roommates,” added McNabb. “And Dawk comes in and he’s like ‘What did he do now?’ and I’m like ‘Take a look.’ Like, this is like Days of Our Lives. Like, it’s unbelievable, you know. That was something that kind of broke us up. That was the most frustrating thing for me.”

An irate T.O. went on to blast McNabb for his comments and even threatened to expose his former teammate’s “dirty laundry.”

On Monday, Owens appeared on Shannon Sharpe’s Clun Shay Shay show and said he would like fight McNabb in a celebrity boxing match to knocck the “Chunky soup” out of him.

Terrell Owens said if he were to box anyone in a celebrity match, it would be Donovan McNabb