Terrell Owens Rips Jason Garrett As A Coach, Accuses Donovan McNabb Of Cheating On His Wife 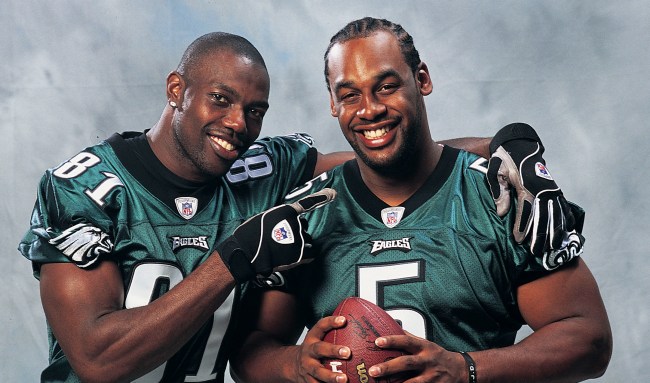 Hall of Fame wide receiver Terrell Owens has had himself a week. He went on not one, but two different shows and proceeded to go scorched Earth on his former coach with the Cowboys Jason Garrett and then dropped a bombshell accusation that his former Eagles teammate Donovan McNabb is cheating on his wife.

During his appearance on The Breakfast Club, after discussing why the Cowboys let T.O. go even though he was the team’s leading receiver, Charlemagne asked Owens, “What’s the problem with the Cowboys, you think?”

Owens also added that he thinks Tony Romo is a better announcer than he was a quarterback. Romo’s upcoming salary would agree with that statement.

They also covered numerous other topics in the 55-minute segment which you can view below.

Now we move on to the real news of the day regarding Terrell Owens.

Owens’ feud with his former teammate Donovan McNabb has long been a heated one, but now it’s just getting flat-out nasty.

After McNabb threw T.O. under the bus a few weeks back, blaming the wide receiver for the breakup of what he felt was a Super Bowl team in Philadelphia, Owens threatened to expose McNabb’s “dirty laundry.”

On Thursday, T.O. fulfilled that promise by subtly accusing the former Eagles QB of cheating on his wife during an appearance on The Brilliant Idiots podcast.

During a conversation in which it was brought up that McNabb was fired by ESPN over allegations of sexual misconduct from his time working for NFL Network, Owens broke what the hosts referred to as the “Bro Code” by mentioning that McNabb is married.

He is didn’t deny it (and even nodded along) when host Andrew accused McNabb of getting sick in the Super Bowl because he’d been drinking. Yikes.