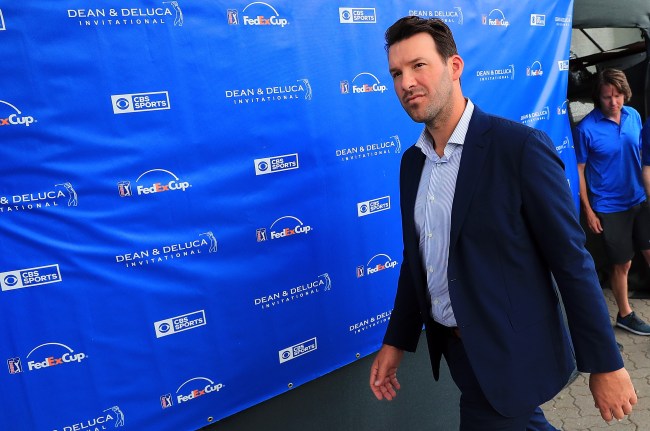 A mega Tony Romo TV deal is coming soon, with a variety of media companies looking to pay huge money in order to get the former Dallas Cowboys quarterback to be part of their NFL telecasts. While Romo has exceeded every single expectation since calling games for CBS since the 2017 season — particularly blowing everyone’s minds with his predictive reads of plays pre-snap — and becoming a star behind the microphone, nobody knows for sure what type of money it’s going to take in order to get him.

While there have been a few rumors thrown around about the next Tony Romo TV deal — with many expecting him to get the highest salary ever for an on-air personality, surpassing the legendary John Madden’s contract decades ago — the latest report is absolutely absurd. That’s because Sports Illustrated projects Romo to get an annual salary somewhere between $15-$20 million a year. To put that in context, it’s more than a handful of starting quarterbacks in the NFL are making right now.

A month ago, we were told he had an offer from ESPN that would “double his salary,” according to a source. And now?

How about a bidding war that results in a new annual salary of $20 million?

The former Dallas Cowboys quarterback has been loved in that role for CBS. Many praise his abilities in the booth, and it appears ESPN has taken notice.

One report before the Super Bowl suggested was ESPN is preparing to make him a massive offer of around $10-to-14 million a year to leave CBS. Such a deal would make Romo the highest-paid sportscaster in TV history. A source told CowboysSI.com then that the network was preparing to “double his salary”; it’s believed that Romo presently makes $3 million a year, so …

Up, up and up we go, with this report about a “bidding war” taking the number as high as $20 million annually.

Can you imagine being Tony Romo right now, guys? He’s got the NFL broadcasting game in the palm of his hand, with the talented commentator controlling how much he wants and what network he prefers. And the fact that he could potentially go from a cool $3 million per year — his expected annual salary with CBS at the moment — to $20 million per year would probably make the decision a helluva lot easier.

As for the current NFL quarterbacks that don’t even sniff that type of annual salary, just look at some of the names on the list below who Romo would surpass with a $15-$20 million a year deal, per Over The Cap. Note: Annual salaries in parenthesis.

It’s inevitable that a Tony Romo TV deal is going to get done, it’s just a matter of how much the former quarterback’s going to get paid, and which network is willing to make him the face of their NFL coverage. In an NFL offseason that’s bound to be crazy when it comes to the quarterback market, it might be the 39-year-old Romo who comes out as the biggest winner of all the signal-callers — even though he’s not even taking hits from 300-pound lineman anymore.