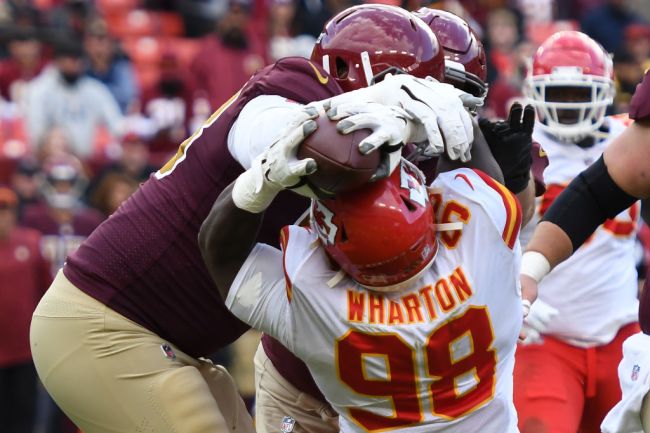 Tershawn Wharton may have made the craziest interception of all-time on Sunday. No hyperbole.

The Chiefs’ defensive lineman saw a screen coming, leaped into the air, grabbed the football with one hand, pinned it to the offensive lineman that was blocking him, secured the ball with two hands, fought off the attempts to knock it loose, pinned the ball against his own helmet and held on for the pick. Take a look at this insanity:

Here is the slow-mo replay angle that really illustrates just how bonkers Wharton’s effort was:

Big man with the snag 😱 #ChiefsKingdom

To make things even better, Wharton’s story is awesome.

The 23-year-old is an undrafted free agent in his second season in the league. He is from a small town in Missouri and did not have a Division-I offer out of high school.

Instead, Wharton played his college football for Missouri University of Science and Technology, an 8,000-student Division-II school in a rural part of the Show-Me State. He ended up with the third-most sacks in D2 history as a sophomore and finished his career with 58 tackles for loss.

Wharton signed with Kansas City shortly after the 2020 NFL Draft, made the Chiefs’ final roster out of training camp and made his NFL debut in Week 1. Now he’s an integral part of the team’s defensive front and he’s out there making the most absurd, insane, mind-blowing interceptions you’ve ever seen.