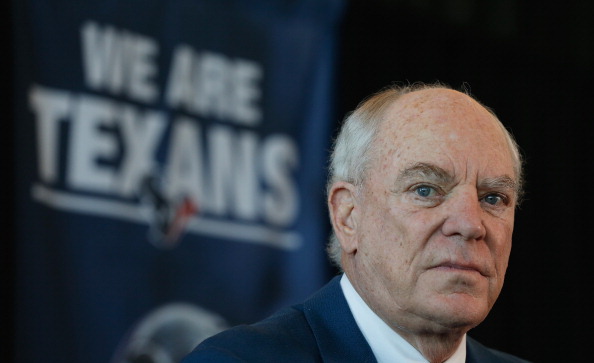 Houston Texans players are planning to protest as a team before Sunday’s game against the Seattle Seahawks. The backlash comes after the Texans’ owner Bob McNair made the controversial “inmates running the prison” comment. On Saturday, Texans players held a team meeting to decide how they would react to McNair’s comment. The possible protest options talked about were to all kneel together, raising their fists in solidarity, staying in the locker room during the national anthem as well as peeling the Texans logo decal off of their helmets. Texans players considered a walkout during the team’s practice on Saturday, but they did not. On Saturday morning, McNair met with Texans players and expressed regret for the initial comment.

During the owners meeting in New York City earlier this month, the topic of the national anthem protests came up. That’s when McNair said, “We can’t have the inmates running the prison.” The contentious comment was made public on Friday in an “ESPN The Magazine” story that detailed the owners meetings. McNair has since apologized for his comment by saying, “I am truly sorry to the players for how this has impacted them and the perception that it has created of me, which could not be further from the truth.” On Saturday, McNair met with the players on Saturday to apologize. In a statement, NcNair said that the “inmates” comment was a reference to the league office and not the players. “As I said [Friday], I was not referring to our players when I made a very regretful comment during the owners meeting last week,” the statement said. “I was referring to the relationship between the league office and team owners and how they have been making significant strategic decisions affecting our league without adequate input from ownership over the past few years.”

Though #Texans owner Bob McNair did apologize to players yesterday, it did not go over well. I’m told to expect some form of protest today

McNair was invited by a coalition of NFL players to meet with commissioner Roger Goodell and Colin Kaepernick to discuss the protest issues as well as the “immediate concerns before additional progress can be made.” The meeting was suggested to happen on Monday in Philadelphia. It is not known whether McNair, Goodell or Kaepernick would attend.

The Texans play the Seahawks at CenturyLink Field in Seattle at 4:05 pm today.