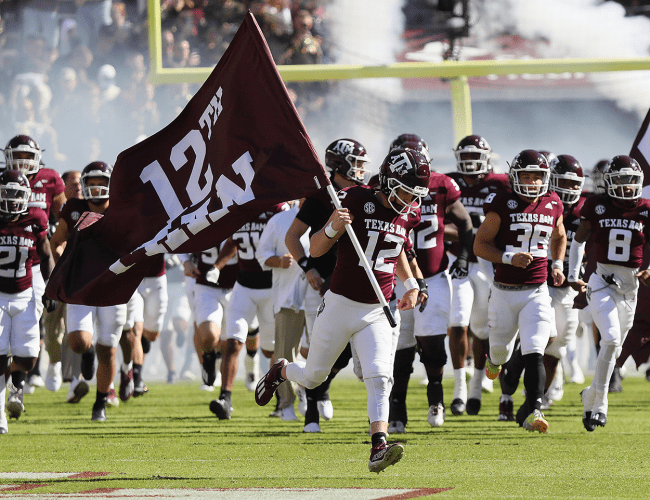 As things currently stand, the University of Texas and University of Oklahoma are set to join the Southeastern Conference in 2025. That timeline could change depending on various factors, like TV contracts, but it’s happening.

When the move does take place, it will open up the opportunity for the renewal of a deep-rooted in-state rivalry. By moving from the Big-12 to the SEC, Texas will be in the same conference as Texas A&M and the two could play annually as part of the conference schedule— if they are placed in the same division.

The Aggies and the Longhorns first played against each other in 1894, but have not played since 2011. That could change as soon as 2025.

Once the SEC adds its two new schools, the entire conference is set to go under realignment. The current and new programs will be split into different “pods” that will determine what schools are part of the annual schedule on the gridiron.

But a new report suggests that the former is ducking the latter. According to Chip Brown of 247 Sports, Texas A&M is not interested in being placed in the same “pod” as Texas, which would require the two schools to schedule each other as non-conference games, rather than scheduled through the SEC.

Per Chip Brown @Horns247, A&M doesn’t want Texas in their pod when they join the SEC.

I understand Longhorns have owned Aggies since the rivalry began. But to not even want to avenge the ass whoopins we gave out is SOFT! Should be begging for a rematch lol pic.twitter.com/hZNY7Fclun

As of their last meeting in 2011, the Longhorns currently lead the all-time series 76-37-5. Maybe the Aggies are scared of those numbers getting away from them?

The report from Brown suggesting that Texas A&M does not want to be in the same “pod” as Texas in the SEC has caused a lot of controversy.

In direct response to Brown’s report, Billy Liucci of 247 Sports is pushing back. He says that Brown’s report is false and that A&M does want to see UT every year.

Please don't be this stupid. A&M and Texas are playing every year regardless of whether they're in the same pod or not. Fact: A&M (and every other team) was asked to which teams they'd prefer to play annually and I know with 100% certainty that Texas was on the list. https://t.co/gPIlYhlXSN

When asked for receipts, however, Liucci could not provide them. He simply doubled down on what he said that he knows.

They'll play every year, same pod of not. The entire stance that A&M doesn't want the game to be annual is completely made up. Texas and LSU were the two teams A&M said they should play annually.

As for who is right, we can only wait and see. Is Texas A&M and and athletic director Ross Bjork — who has been known to blow smoke in the past — trying to avoid one of the nation’s best in-state rivalries? Is Texas starting beef to get under their older brother’s skin?

If the Aggies are dipping out on the Longhorns, that would be super lame. To be in the conference and not play the in-state rivalry would be ridiculous.