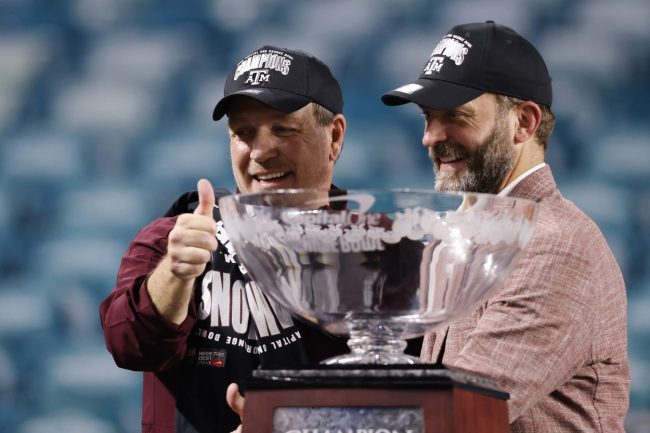 Texas A&M football earned the No. 1 recruiting class for 2022 and it is absolutely loaded. A lot of speculation has been made about how the Aggies acquired their class, but athletic director Ross Bjork wants to be very clear that he is not concerned with the haters.

However, he seems to have forgotten that he was caught cheating in the past.

It is a very impressive effort that, in the current climate of Name, Image and Likeness, likely cost a small fortune. Per recent reports, the Aggies boosters spent upward of $30 million to land the class that it did.

Although that number is not official, nor will it ever be on the record, it would not be surprising. Regardless of what the number is in reality, Texas A&M’s boosters probably spent a lot of money to land the nation’s top class.

Head coach Jimbo Fisher even alluded to the fact that players have been paid illegally in the past.

Now, through Name image and Likeness, it is legal. Kind of.

Although a recruit cannot be promised a deal for his NIL in turn for a commitment, the idea can be floated. A prospect can be told something along the lines of “hey, we know of X amount of money that exists for NIL if you choose to commit here.” Upon enrollment, those deals can be inked and paid out.

It is a very grey area without much regulation. Nick Saban even gave a warning about Name, Image and Likeness that sounded more like a threat than a caution ahead of the National Championship. College football, in a way, has gained an element of free agency.

Thus, for Texas A&M’s boosters to pay out a significant amount of money when their current commits officially enroll is not illegal. Nor is it is uncommon across the landscape of the sport.

And yet, Aggies athletic director Ross Bjork is not willing to admit what is likely going on. He recently spoke with the Houston Chronicle about the reports of $25-30 million being spent to land the No. 1 recruiting class.

He got very defensive.

Bjork also said that the accusations are a slap in the face to his program.

“You had to have seen the building blocks being put in place,” he said. “It’s not like we went from the 50th-ranked recruiting class to No. 1. This has been a process since Jimbo got here (in December 2017) — it’s not like we just sprang on the college football recruiting scene this year. If anybody has any angst over this, they weren’t paying attention to what’s been built over the last four years.”

If Bjork is saying that the recruiting growth has been a process since Fisher arrived on campus in 2017, and Fisher is saying that players were being paid illegally prior to NIL, would the two not correlate?

Prior to getting to College Station, Bjork served in the same role at Ole Miss. While he was there, the Rebels were hit with sanctions for cheating that occurred under his watch.

The almost five-year saga is rather complex. A full, expansive timeline of everything that happened can be found HERE. In addition, a four-part documentary called Foul Play does a really good job of telling the story.

But, essentially, Ole Miss was caught paying recruits in turn for their commitment. It was also providing impermissible benefits for players already on campus, like Laremy Tunsil.

As a result, the Rebels were accused of 15 Level I violations. Ultimately, after Bjork foolishly cooperated with the NCAA, Ole Miss received a two-year bowl ban, had wins vacated, received scholarship sanctions, and were placed on probation.

REMEMBER— Most of the violations happened under Bjork’s watch!

Not long after leaving the Ole Miss program in shambles, Bjork bounced for A&M. Now the Aggies landed the top recruiting class in the country, topping Alabama and Georgia for the first time since 2010, if it holds.

Coincidence? You do the math.

“A&M has been proactive in terms of setting up systems of educating student-athletes, setting up reporting systems that have to take place as part of Texas law and helping student-athletes build their brand,” he said to the Houston Chronicle. “In terms of being proactive in arranging agreements? We can’t be involved in that. I would say that Aggies, meaning our donors and fans, see the value in the NIL programs, and having them be proactive has been terrific. Obviously, we can reap the benefits of that by having a great program.”

In addition, he is being very vague about what A&M’s boosters are doing behind the scenes.

Basically, so long as Bjork doesn’t know what is going on, he is in the clear.

In response to the “haters,” Bjork is taking a very abrasive approach about how Texas A&M is “in the big chair.”

“Recruiting in the SEC is not for the faint of heart,” he said. “You understand there’s going to be scrutiny, and our job is to control what we can control. We know we’re educating our staff and athletes in doing things the right way, and that’s all you can rely on at the end of the day. Whatever the naysayers or haters or whatever you want to call them say, we know that’s life in the big chair, and we’re prepared to deal with it.”

This all comes from a man who was caught red-handed overseeing a program that was cheating. No matter what he says, or how he says it, his credibility is forever tarnished.

Why not be open and honest about being the best at what you are doing legally, if it is in fact being done legally?