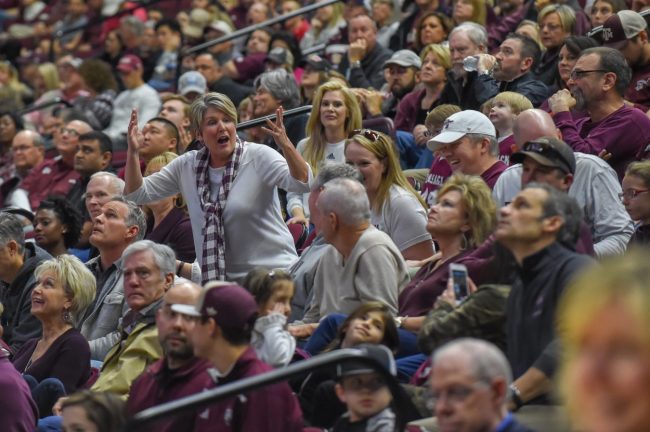 When Texas A&M basketball took the court against Kentucky on Wednesday evening, it was one of the biggest games in the program’s recent history. The Aggies ended up losing, but the takeaway had nothing to do with the actual result.

At halftime, a local country and western dance and stunt team took the court in front of a packed house. Their performance was impressive and requires a lot of both skill and practice, but it was also very cringeworthy.

Dressed in Texas state flag shirts, jeans and boots, a group of guys first took the court and danced to some quirky choreography. From there, a group of girls joined the gentlemen and showed off some pretty impressive aerial stunts.

It could not have been anymore Texas.

And for a school like A&M, which already receives backlash for their strange, all-male cheerleaders, and for being a cult, it didn’t help with the stereotypes and making them the butt of the joke.

On Thursday night, the Texas A&M women’s basketball team hosted Ole Miss. The Rebels are cooking this season at 16-2 and well on their way to an NCAA Tournament bid for the first time in a long time.

They rolled into College Station on Thursday and put an 80-63 beatdown on the Aggies. After the game, Ole Miss’ official twitter account savagely trolled A&M on their way out of town with a reference to Wednesday’s halftime show.

Us on the way back to Oxford with the dub pic.twitter.com/zyvFstYrpQ

For the Rebels to send it off the top rope is absolutely hilarious and it would be even better if it becomes a trend across the SEC.