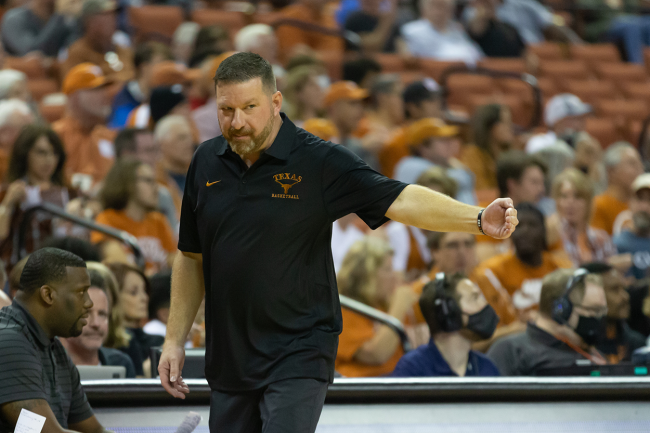 The University of Texas basketball program is 1-0 in the Chris Beard era. After hiring their new head coach away from Texas Tech, the Longhorns began their season with a win over Houston Baptist on Tuesday.

To celebrate, Beard is throwing a party for students.

The 48-year-old first-year head coach arrived in Austin with a lot of expectations. One of the many goals that he set for himself and his program was to sell out the student section for the season opener.

With a total attendance of more than 14,600, it was a success. Tuesday’s crowd marked the fourth-largest crowd for a home opener in the 45 years that Texas has played at its current arena.

Beard even invited students onto the court after his first win with the program.

There is a difference between “storming” a court after a win, and the head coach calling students onto the court for a picture after a first win.

And, as a result of the massive turnout, Beard is staying true to a promise he made before the season. He told students that if they sold out his first game at Texas, he would throw a party at the UT tower.

Thank you TEXAS STUDENTS for a great home opener. Party at the Tower soon. 🤘🏽#PartyAtTheTower pic.twitter.com/n6gfUiBe4S

Although the exact details of the event are still up in the air, it’s going to be a big deal. Beard even hinted that Texas’ AD Chris Del Conte was already looking for “live entertainment.” Whatever that means, we will find out, but Beard even said that there might be an appearance from Bevo.

This is not the first time that Beard made a promise of this nature. While at Texas Tech, he made a deal where he would officiate a fan’s wedding and provide Whataburger for the reception if 4,500 students showed up for the first home game.

Beard is a program builder and No. 5 Texas is off to a hot start. If the atmosphere in Austin can continue to be a factor, the Longhorns could be one of the most dominant home teams in the nation.