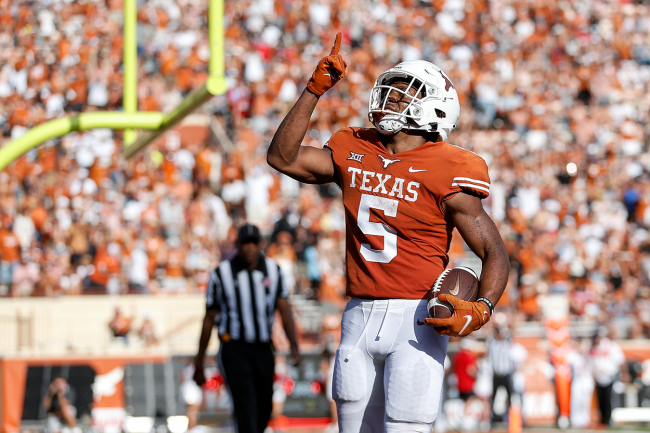 Texas football has some of the highest, if not the highest expectations of any college football program in the country this fall. At the forefront of that offense is Bijan Robinson.

Robinson, who was a five-star recruit and the No. 1 running back in the Class of 2020, enters his third year with the Longhorns in 2021. He immediately burst onto the scene during a COVID-shortened 2020 season and averaged a ridiculous 8.2 yards per carry on 86 touches.

As a sophomore, Robinson continued to be a workhorse as Texas continued to struggle. Over the course of 2021, the 6-foot-0, 221-pound back scampered for 1,127 yards and 11 touchdowns on 195 carries. He also played an important role as a pass-catcher out of the back field in each of his first two years.

Now, as Robinson hopes to become the first running back selected in the 2023 NFL Draft, there is a lot of weight on his shoulders. Although the Longhorns have a few playmakers on offense and Quinn Ewers is supposed to be a star, Robinson’s role in the offense will be established early and often.

In fact, much of the offense will (literally) run through him, and he looks ready to step up once again.

During spring workouts and practice, Robinson’s massive lower body muscles went viral for looking more like tree trunks than legs. On Wednesday, his personal trainer offered some insight into how he got to that point.

Here is a look at Texas running back Bijan Robinson’s lower body workout:

Prior to the lift, Robinson did a linear speed session. That will tire most people out on its own.

From there, his leg day broke down like this:

As Robinson went through the workout, he could not have looked more explosive or athletic.

Robinson is going to be a problem for opposing defenses this year. He could very well finish the season as the top running back in the nation.