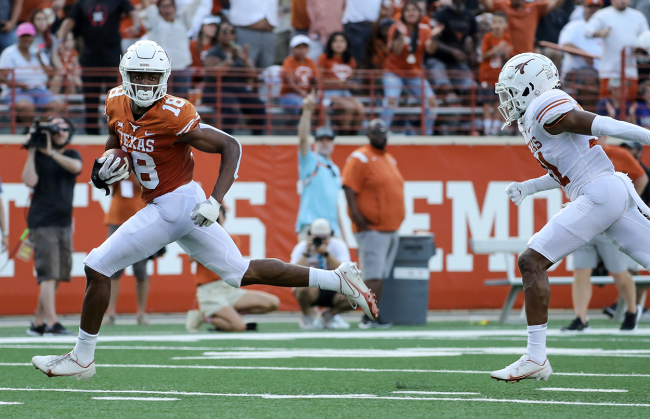 Texas football finished below .500 last season. It is seemingly impossible that the Longhorns will finish any worse in 2022 and the transfer portal is a big reason why.

During the offseason, head coach Steve Sarkisian and his staff added seven high-profile transfers from the portal who are all expected to make an immediate impact. Of them, wide receiver Isaiah Neyor is a name that casual college football fans may not know — yet.

Neyor, who was a two-star recruit out of high school, stands 6-foot-3, 210 pounds. He committed to Wyoming in the Class of 2019 and received his first opportunity with the Cowboys during the COVID-shortened 2020 season.

Although he made only eight catches in four games, he averaged 31 yards per catch. As a redshirt/COVID freshman in 2021, Neyor turned things up a notch and became a crucial, if not the most important, component to Wyoming’s offense.

Neyor caught 44 passes in 13 games for 878 yards and 12 touchdowns. That came out to an average of 20 yards per catch. He is explosive and was the team’s leading receiver by 19 catches and almost 600 yards.

As a result of his impressive second year, Neyor immediately garnered interest from top Group of Five programs and was seemingly headed to Tennessee. At the last second, the Texas-native flipped and ultimately landed with the Longhorns. He will likely start alongside Xavier Worthy and Jordan Whittington in his first season in Austin and deservedly so.

Over the weekend, as Texas wrapped up its first week of fall camp, Neyor made the best catch of the season so far. Quarterback Hudson Card launched a deep ball over the middle of the field, where Neyor was seemingly locked up by his defender.

However, not only was the throw right on the money to where only the receiver could get it, Neyor made a ridiculous fingertip catch that involved a few bobbles and a lot of focus. He only had two fingers on the ball at one point and still managed to make the grab.

Fall camp only got underway last week, but Neyor is already doing freaky things in burnt orange. Is Texas… dare I say… back?! Only time will tell.