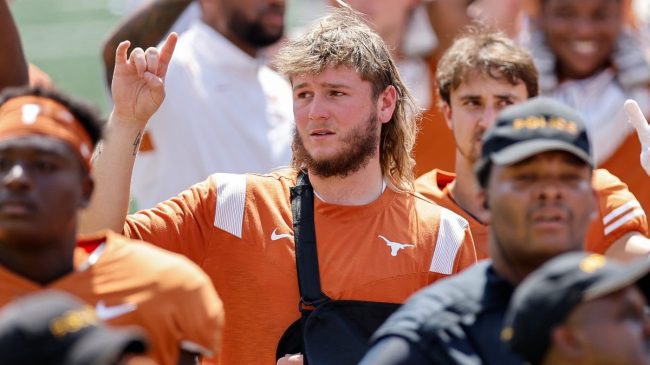 It’s all coming up Longhorns!

When was the last time that you could say that?

After years and years (and years) of discussions about whether or not Texas is back, something about this year’s team just feels different. Maybe it’s the talent level. Maybe it’s something that head coach Steve Sarkisian has instilled in his players.

But the culture around the Texas program just feels different as the Longhorns slowly try to claw their way back into the college football scene.

Texas currently sits at 2-1 on the young season with the lone loss coming in a hard-fought, heartwrenching loss to Nick Saban and Alabama.

The Longhorns begin the Big 12 portion of the 2022 season on Saturday against in-state foe Texas Tech, and they may be adding a big weapon back to the fold.

Freshman quarterback Quinn Ewers was all anyone could talk about after the loss to the Crimson Tide. Sure, Ewers played less than a quarter in that game. But the former five-star recruit looked in complete control of the offense before leaving the game after a borderline dirty hit by Bama linebacker Dallas Turner.

Ewers suffered a clavicle sprain on the play and despite the diagnosis of Dr. Drew Brees, the actual doctors expected him to miss anywhere from 4-to-6 weeks.

Now it appears that may have been on the cautious side. Sarkisian said Thursday that Ewers will not only travel to the Longhorns’ game against the Red Raiders on Saturday, but he’ll also dress to play.

Sarkisian didn’t say whether Ewers would actually play in the contest. It’s been just two weeks since the injury. But the Longhorns are just 7-point favorites in the contest and may be in a spot where they need him to contribute.

Backup Hudson Card played well in relief against Alabama and started last week in a 41-20 victory over UTSA. But Card was just 15-of-23 for 161 yards and a score in that game and Texas trailed for much of the first half.

Whether or not Ewers plays, Longhorns are ecstatic about the speed of his recovery.

Texas may or may not be back, but Ewers certainly is.