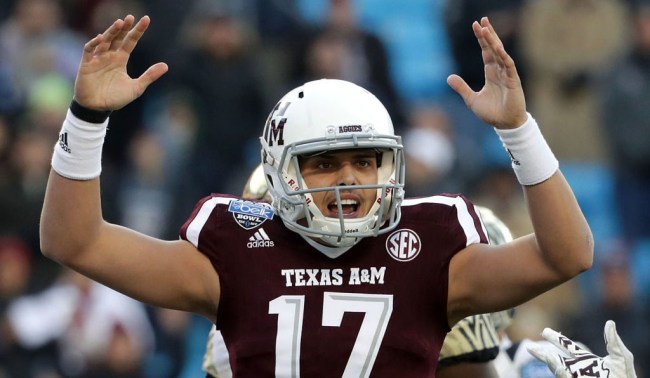 What a week for guys shooting their shots on social media. First, we’ve got that guy who scored a date with tennis star Genie Bouchard via a Twitter bet getting yet another date with her, this time going to the Super Bowl together.

Then there was the guy at Missouri State who went viral because he emailed every Claudia at his school after accidentally swiping left on a girl he was interested in on Tinder.

And now we’ve got freshman Texas A&M quarterback Nick Starkel successfully scoring a date with a girl named Lindsey he saw in a diner, but was unable to get any other information about until he asked Twitter for some assistance.

“I need some help Aggieland! If anyone knows a girl named Lindsey that works at Hullabaloo Diner, DM me. Hope this works,” tweeted Starkel, who last month threw for a whopping 499 yards in the Aggies’ 55-52 loss in the Belk Bowl.

I need some help Aggieland! If anyone knows a girl named Lindsey that works at Hullabaloo Diner, DM me. Hope this works😂

Fellow A&M quarterback Johnny Manziel among those impressed with the kid’s moxy.

Naturally, this being Twitter, it didn’t take long for someone to locate Lindsey.

Fast forward four days and yep, Nick and Lindsey got together for a little meet-up.

“@NickStarkel is headed to get ice cream with Lindsey. Twitter makes dreams come true #IntwitteriBelieve,” wrote Aggies linebacker Tyrel Dodson alongside a photo of a grinning Starkel heading out for his date.