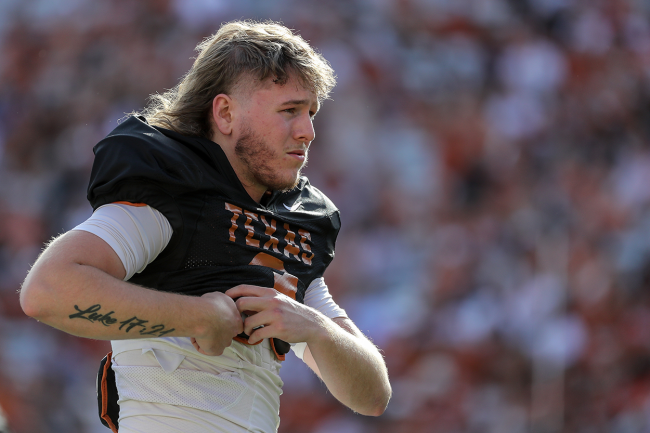 Quinn Ewers is one of the biggest names to watch in college football and he’s extremely hard to miss. The redshirt freshman quarterback has one of, if not the most distinctive look in football.

Ewers, who spent his first year at Ohio State, has donned a mullet that would make Hulk Hogan jealous since his junior year of high school. After transferring to Texas, the mullet was so glorious that it had the grumpy olds in a tizzy. That’s how you know it’s electric.

Earlier this year, as he battled for the starting job during spring practice, Ewers’ mullet was absolutely flowing out of the back of his helmet. He has not cut it since.

As the expected QB1 at the University of Texas, there is a lot of weight on his shoulders to return the Longhorns to national relevance. Despite all of the pressure on him entering the fall, Ewers took some time to relax and play some golf over Memorial Day Weekend. It may have also been part of an NIL deal with 100 Thieves, but he was swinging a club on the links nonetheless.

While out on the course, Ewers’ mullet was on full display. The party in the back was absolutely raging out of the back of his hat.

Of the big-name quarterbacks in college football, Ewers is among the biggest. His look, however, stands alone and it’s awesome,