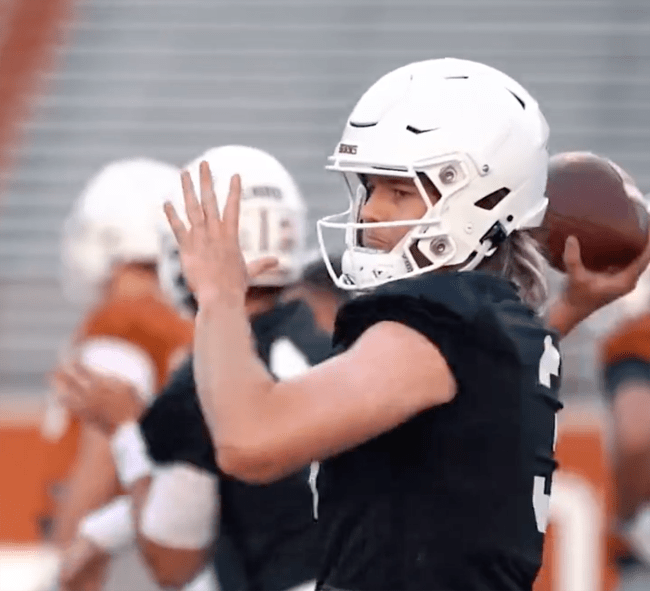 There are a lot of storylines to follow during the college football spring practice period, but quarterbacks are always at the top. This year in particular, the battle for the starting job at Texas is particularly intriguing.

On one end, Hudson Card is the veteran looking for one last opportunity to put his head down and prove himself. On the other end, Quinn Ewers is the hotshot newcomer with high expectations and a lot of swagger.

Card is a 6-foot-2, 200-pound redshirt sophomore and has played in 10 games with two starts. He was a four-star, All-American prospect out of high school and began 2021 as the starter for the Longhorns before Casey Thompson took over.

Ewers is a five-star recruit who chose to reclassify and enroll early at Ohio State as part of the Class of 2022. Ultimately, after arriving to campus late, he was beat out for the starting job and chose to redshirt. Since then, the Texas-native (who should have been a senior in high school last fall) transferred back home to play for the Longhorns.

Since arriving in Austin, Ewers has made the old folks angry with his luscious lettuce, won the locker room over with his street cred, and got a new tattoo that makes it very clear where his allegiance lies. One thing that he has not done, however, is get a haircut.

Texas football posted the first and best photo of Quinn Ewers’ mullet during spring practice on Tuesday and it is truly a sight to behold.

While his hair is one thing, it won’t win him the starting quarterback job. In regard to on-field play, a recent report from Inside Texas of the On3 Network says that neither Ewers nor Card is pulling away.

With that being said, the report also said that of the two, Card has been performing “better” thus far. The third-year quarterback has reportedly been slightly better than Ewers through the first few weeks, but neither guy has been said to have stood out in the eyes of the coaching staff.

Texas will have seven more practices in April, after Tuesday, and will conclude their spring practice period with their annual spring game on April 23rd. That will be Ewers’ first chance to show off his hair and spin the pill in front of the Longhorns faithful.