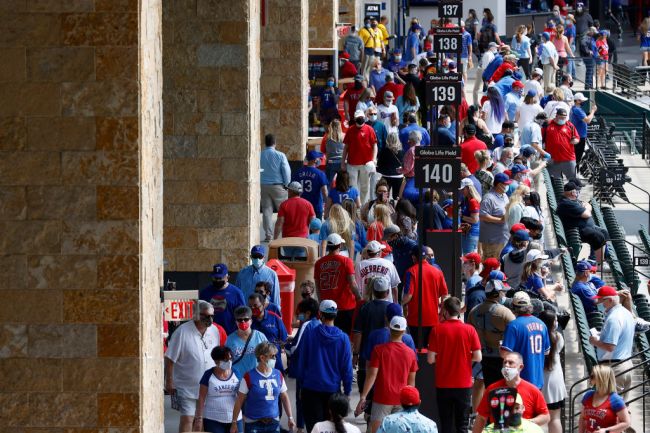 Globe Life Field, the new home of the Texas Rangers in Arlington, became the first Major League Baseball stadium to reopen at full capacity for the team’s home opener on Monday against the Blue Jays. The decision made by the organization to open at full capacity (roughly 40,000 seats) came on the same day Texas Gov. Greg Abbott lifted the state’s mask mandate asking for businesses to fully re-open. Texas’ mask mandate ended on March 2.

All fans in attendance are required to wear a mask at all times except while eating and drinking. Following the home opener, the stadium will have sections allowing fans to watch with “distanced seating” in four sections of the stadium.

After going a full year without having stadiums at full capacity, seeing videos showing the packed stadium is a sight to behold. It’s been so long that despite the stadium not being completely sold out, it’s a shock to the system seeing so many fans back together again enjoying a sporting event.

The crowd is packed at Globe Life Field for Texas Rangers #OpeningDay pic.twitter.com/Et5aQ5T0Tu

Boy is that a superspreader event if I've ever seen one.

Such glee over witnessing a super-spreader event on steroids.

i truly hope you lose every game this season @Rangers ❤️❤️❤️❤️