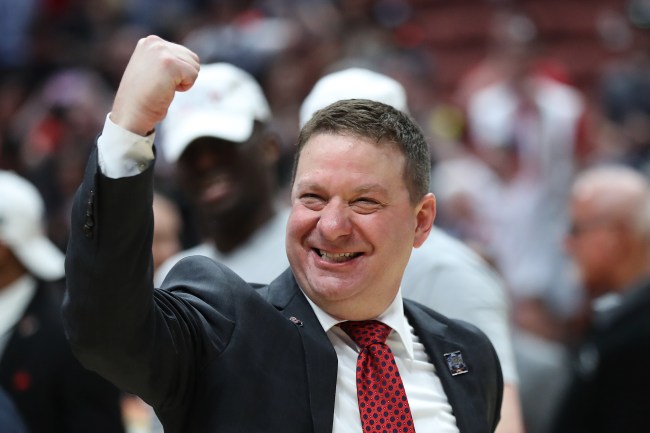 Texas Tech basketball is in its first ever Final Four in school history, with a matchup against the Michigan State Spartans coming up on Saturday. While every Red Raiders fan is stoked about what might happen — especially the person who could win $300,000 after betting on the team to win the national championship while they had 200-to-1 odds to do so — the team’s head coach, Chris Beard, seems pretty cool right now.

Appearing on SportsCenter with Scott Van Pelt last night, Beard was asked by the host to talk about being in his first Final Four. Sure, Texas Tech basketball may have never been there, and, hell, Chris Beard has never “technically” been there before as a head coach, but, don’t be confused, he’s been to the Final Four before — and his answer to Van Pelt’s question was so money. Take a listen below.

Chris Beard with just a next level quote on SVP tonight when asked about him going to his first Final Four compared to Tom Izzo's eighth.

"I've been to like 24 Final Fours, I was drinking draft beer in the lobbies….but I've been to the Final Four." pic.twitter.com/tpdIwjq2Mo

You can’t help but love this from the Texas Tech basketball coach. I don’t know much about Chris Beard other than what was online — like how he’s won Big 12 Coach of the Year the last two seasons, came to Tech from the University of Arkansas at Little Rock and that he earns $3.175 million per year. But I’ll tell you what: I like this guy. He seems fun to have around; especially if he’s talking about all those times he hustled his way to the Final Four and was downing beers solo in the hotel bar while watching the games.

Chris Beard is so opposite the head coach his Texas Tech basketball team plays against in the Final Four, Tom Izzo, who’s as old school as they get. But whatever the guy’s doing seems to be working well for him, so here’s to seeing Beard down a bunch of beers to celebrate a national title come Monday night, because that’d just be a cool story that came full circle.